“No, not a single letter is seen

So many histories are seen

On so many races”

English is the unacknowledged Creole of the world. Chandramohan, the Indian English poet, uses the colonial patois to craft an intergenerational dialogue with the Malayali social reformer Poykayil Appachan. He uses the versatility and ecumenism of the English tongue to foster an audience for his poetry as well as to give visibility to subaltern struggles. Chandramohan writes, `I am the poet, fixing images/From the abyss of time/Into the canvas of the past/Where myth and history are miscible/with the precision and swiftness of/A forked-tongue cobra strike’.

Politics is the realm where everybody becomes visible to everyone else, according to the French theorist Jacques Ranciere. Poykayil Appachan in fin-de-siecle Kerala, wrote that, `invisible are the letters of my people’. The subaltern couldn’t be seen. This visual absence is akin to the undelivered speech of Dr.B.R.Ambedkar at the Jat Pat Tod Mandal. This unheard, unseen spectralization is undone and reversed through the hard guttural Dravidian sounds of an acquired English. Much as predicted by Chandrabhan Prasad, the Dalit intellectual leader, the muscle that English-learning has conferred on the subalterns in Kerala is well documented in the works of PRDS or the Pratyaksha Raksha Daiva Sabha promulgated by Poykayil Appachan, thus engendering a Dalit theology in Kerala, which is alive to this day, thanks to reformers like Sree Narayana Guru. This has been expressed amazingly well by S. Chandramohan, just as the majoritarian Deutsch was minoritized by the Yididish Kafka. This paper seeks to inquire into the reterritorialized subjectivities that inform this poetical sojourn and the emancipatory potentials for the same.

It was William Blake who said that one has to create one’s own myth, or be enslaved by another man’s. Chandramohan like a latter day Langston Hughes, sets out to accomplish this daunting mission of creating a mythology for the subaltern. He in `Autobiography of the Letter X’ speaks for the dispossessed, with the legendary figure of Poykayil Appachan (Kumara Guru) in the foreground. This mythical crafting of an emancipatory trajectory for subaltern history follows an intricate verbal enunciation as well as an exquisite mobilisation of poetic imagery. The cliché that the political should be subordinate to the aesthetic is upturned here. Chandramohan doesn’t set out with any manifest designs on the reader, as Iser would say. But the poems in his oeuvre, since the pathbreaking `Letters to Namdeo Dhasal’ to the latest `Love After Babel’ cannot but sear themselves into the soul with their intensity and refreshing uniqueness. The palette that the poet uses is often dark, though it reflects the times we live in.

`In dark times there will be singing; about the darkness’. For Chandramohan darkness is liberating and it is a double edged sword. For him, the Burkini is black, the beard is black, the bird is black, and the future is also black. `Language is the house of being,’ for Heidegger. But Chandramohan subverts it and for him, a more apt quip would be the Slovenian thinker Slavoj Žižek’s infamous remark, `language is the torture house of being’. Words for Chandramohan are wrenched out from the torn soul of the subaltern past. The unbearably unutterable finds much belated articulation therein.

In `Love After Babel’, Chandramohan sets out with `Thirteen Ways of Look at a Black Burkini’. It is a take on his own well appreciated poem `Thirteen Ways of Looking at a Black Beard’, which itself was a playful riff on Wallace Steven’s `Thirteen Ways of Looking at a Blackbird’. In irony, the poet keeps his commitment. The poem delves on the theme of that uber subaltern in the contemporary world-the Muslim woman clad in hijab. This time she is clad in a burkini, yet dangerous. Chandramohan writes,“Burkini is a language/Terrifying those ignorant of its text./Cops patrol her tan lines/Like dams patrol/Rivers flowing above danger marks./ All you need is in that bag:/Change into a garment/More palatable for the cops in uniform’’. Here the poet is trying to articulate a universal position.

The question is not `Can the Subaltern Speak?’ as formulated by Spivak, or the counter query `Can the bourgeois listen?’, but rather as Gopal Guru observed `Can the subaltern articulate a universal position?’ in a world that is fragmented between conflicting subalternities, such a position is rare. Can the Dalit speak for everyone? He/she is seldom allowed in the vernacular tongues.

This is not the bleeding heart nonsense of rebellious angst, but awakened globalized agitprop in its most sophisticated avatar since 1968. This globalized, universal articulation championed by the likes of Achille Mbembe, soars on the wings of pan subaltern tongues such as English and French (in the case of Mbembe).

It has been observed in the context of Sheldon Pollock’s `Language of Gods in the World of Men’, that English today occupies a position analogous to that of Sanskrit in ancient India. This linguistic slotting of English as the lingua franca of the day is deftly made into a tool of emancipatory historiographic crafting by Chandramohan. The colonial legacy of English, as emblematized in the figure of the scholar-administrator Thomas Babbington Macaulay, and its deterritorialization is thus reterritorialized in such a potential for emancipation. Ironically Chandramohan’s polar compatriot in this `writing back to the centre’ would be the Thiruvananthapuram MP, Sashi Tharoor, who strives to bedazzle readers with a ridiculously exotic vocabulary, often used to harangue the Brits for the historic injustices committed by their forbears.

As the poet said, `Let’s not be condemned for who we are

It is enough to account for what we do’.

Chandramohan’s poetry could thus be the harbinger of a subaltern renaissance. But starting with Florence, renaissance has always spatially been located elsewhere. For England, it was in Italy, for the Scots, America and for the Kerala of Kumaran Asan, renaissance was located in Bengal and so on. Linguistic displacement takes that `renaissance to come’ into the farther shores of an alien tongue in the form of English. But in the meantime, the agents of globalization have mobilized an assemblage of resources that are more easily accessible in English as the global lingua franca, than in any other tongue. This universal position that English as a language affords the subaltern, and also its precipitation as such through poetry, is the unique contribution of Chandramohan in `Love after Babel’ and other works. It is not just a mythology that is harnessed in the service of emancipation, but an entire literary and linguistic heritage itself.

In the poem titled `Other’, the poet says,

“In the palette of his hieroglyphic expressions

I decipher a codebook of prejudice.

In the archive of exposed crimson veins in his cornea

I retrieve a manuscript of contempt.

In the superlative adjectives of his flattery

I discover a verb of deception.

In his effervescent smiles

I sense a tinge of alienation.

In his adoring synonyms of deification

I deduce the snobbery of denigration”.

Those adjectives of snobbery and alienation occur in the vernacular tongues such as Malayalam, Tamil, Hindi, Urdu etc, and the erstwhile classical Sanskrit. But English, often accused of being a snobbish tongue, itself is free of that quality in this context. Here the poet achieves a homoepathic strategy towards historical healing. The past is refilled with what was lacking in it, namely agency of articulation. The wheel of history has meanwhile replaced Sanskrit with English. This is a profoundly Hegelian, and not to say, poetic, lesson.

Žižek opines in typical Hegelian fashion that it is the future that is fixed and unalterable, the past can always be changed. This involves absence. If substance `a’ was missing from my childhood, then I can always reimagine it as being missing in quantity/quality `b’. Thus the past can be made amenable to change. In the subaltern context, that substance `a’ was freedom, and the visibility, protection, voice, gesture, movement and everything else that it offered the free humans. But that very same past can be reimagined as lacking in `English’ as in universal linguistic articulation. This can be retrospectively remedied epistemologically. English is epistemologically open and available unlike Indic languages that were epistemologically closed. Thus an entire language, English, becomes a mythology.

Through epistemological induction into English, the subaltern is crafted as the truly modern. Deepankar Gupta opines that Indian modernity will remain `mistaken modernity’ as long as the caste system persists’. (This prescience underlies Gupta’s own dabbling in creative writing in English). The primordial caste `being’ cannot be altered in a lifetime, as the examples of Gandhi and others before have shown. But a constituting process of `becoming’, can be initiated in poetry. It is one that rehabilitates the subaltern’s stolen species being. It’s the process of rediscovering the lost Atlantis all over again, without relapsing into golden age nostalgia.

There is a profusion of jingoistic, nationalist poetry of the chest thumping variety emanating from various Indian English sources. This is an elitist, privileged, snobbish and exclusivist mediocre instantiation of the Bard’s language. (It is in this context that Žižek says that there is no genocide without poetry!) The only antidote is to return English to its emancipatory locus as the only real link language that contemporary India can posses. Thus Miranda allies with Caliban.

“Your body stripped off the garment

Can a language be a scarecrow?

History will catch up with you

In your rear-view mirror

Even if you are full throttle in your

-Chandramohan Sathyanathan, `Thirteen Ways of Looking at a Black Burkini’.

Žižek, Slavoj, `Tarrying with the Negative’

Žižek, Slavoj, `Less Than Nothing’. 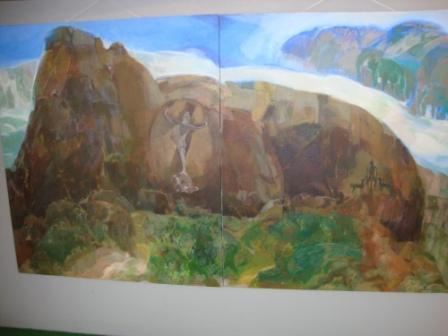