The Swachh Bharat (Clean India) campaign has raised a few critiques questioning the credibility of the campaign. Most of the debates are responses to the pictures where Mr. Narendra Modi is shown holding a broom and posing for pictures. This article is a small response to the proposed programme.

The argument in this article contains mainly two points:

1. The Clean India campaign is more venomous than the Gandhian idea of cleanliness. The Campaign is more dangerous as it might attract non-scavenging Dalits and Most Backward Castes into the profession.

2. The present campaign puts the onus on sweepers rather than the litterers. This trend will continue unless and until the non-scavenging Dalits take up or even stand up for the cause of the scavenging castes.

These two points are not being considered seriously by the critiques raised by either Dalits or non-Dalits.

The cleanliness drive in India has been an important topic since the inception of municipalities and small towns. Since then India has been symbolically struggling to de-stigmatize the notions around cleanliness and sanitation, but it failed as the stigma is religiously sanctioned and no one wants to discuss it. In the past Gandhi went ahead to ‘de-stigmatize’ sanitation, thinking people will follow him; sadly people followed whatever they were comfortable with and not whatever Gandhi was comfortable about. Gandhi’s de-stigmatization programme was also a response to Dr. B.R. Ambedkar who was representing the voices of Dalits. Gandhi wanted to counter it by staying in a Valmiki colony. We could also see that Gandhi himself was not ready to accept what he allegedly followed, in relation to sanitation. His programme only ended up raising some dust and little else. At present, knowingly or unknowingly, Modi has taken up the broom and is seen sweeping, in pictures, and he has also made it mandatory in government offices that people take up the broom for at least two hours a week. This act can be seen in different ways, and unless we consider the question of whether it de-stigmatizes sanitation, even in the remotest sense, we would not see the danger in this campaign.

The idea behind “Clean India” has to be seen by stepping into the shoes of PM Modi himself. Earlier, BJP tried to spread the rumor of “India Shining” but Gita Ramaswamy wrote categorically about “India Stinking” pointing out the ground realities. However Modi with his own politics is preparing the ground to assert in the coming days that India is clean. He is only bothered about the image of India, in which Dalits/Adivasis/Muslims never had a space historically. His agenda is only to keep the streets and the public places clean. By streets and the public places, he refers to common spaces which mostly savarna castes use. For example, he refers to spaces like Banjara Hills etc in Hyderabad, the posh neighbourhoods.

What worries me is that the streets and the public places are already kept clean by contractual labourers. They get littered throughout the day and the contractual sweepers clean it every day, late night and early morning. This leads us to the conclusion that sweeping or cleaning India is what we don’t require now, we need a campaign against littering instead. Rather than putting the onus on the public (upper castes), Modi puts it on the sweepers and asks them to sweep. Probably Modi did not want to hurt the savarna castes who litter the ‘common space’. His move is part of a larger frame wherein the onus is always placed on Dalits/Adivasis/Muslims in any issue rather than on Hindutvavadis or the upper castes. The sad part is that even in 2014 Modi, coming from an OBC caste, can imitate Gandhi and his politics without any serious opposition from any quarters. The entire critique cannot be around Modi alone, it should be more on Gandhian politics which encourages such acts.

The idea of holding a broom and sweeping reflects the politics that Gandhi represented successfully within the upper castes and the progressive people. Gandhi took a cruel stand to live with the Valmikis of Delhi for a week. However, Gandhi, while engaging with the scavengers, also kept away from them by not eating their food, water, milk. Everything was served to him from Birla’s house, while he was staying in the Valmiki colony. He was also known to have cleaned the toilets in the Indian Railways, though critics say that it was an already clean toilet that Gandhi attempted to clean in full media glare. An analogy can be drawn between the campaign led by Gandhi and the present day Clean India campaign spearheaded by Modi, with his photoshopped image with broom and garbage superimposed in it.

These acts of Modi and Gandhi are co-related with each other. Modi replaces Gandhi in contemporary India, and this has to be studied more deeply than just through focusing on the idea the photoshopped images convey. On top of it, Dalits in general should worry more about this campaign than the scavenging Dalits (this issue I will discuss later). The politics of the broom was only recently taken up by the Aam Aadmi Party (AAP), which took up the broom to represent two things at a time. Broom is also associated with a caste occupation, especially the broom which Modi and AAP use as a symbol. They don’t use the brooms which are used in homes, they pick up the ones which are used to clean roads, toilets, etc. This is a separate occupation seen under Municipalities, where they employ only castes which are traditionally assigned the task of scavenging by Indian society. This caste has been completely neglected by mainstream Dalit political parties.

These Dalit parties should also know that in recent times non-scavenging Dalits too are engaged in this occupation, though they hide their occupation while interacting with others. For example, you can witness that there are a large number of Paraiyar rag pickers in Mumbai, but you don’t find any literature that says that there is such a population in Mumbai. Also in Ooty, Paraiyars do scavenging but they don’t claim openly that they do so. Even the Paraiyar intellectuals reject such a thing is prevalent among the community. While I present these facts it is important to remember that for Paraiyars, scavenging or rag picking is not a caste occupation, and for that reason they do not face any social stigma for doing such a job. Hence they are in the comfort zone when they take up this occupation. There are instances where Paraiyars who are engaged in sweeping do not do scavenging. For that they use Arunthathiyars, as in Ooty, Tamil Nadu. The Arunthathiyar population has been seen as untouchables even by other untouchable castes. When it comes to the question of scavenging in India, how many Dalits who are not from scavenging castes have engaged with it?

The reality of ‘shit’ /’excreta’ stinks, and this notion shall seep into even these words in due course. As a result anything associated with the occupation is considered as untouchable. For Dalits who are politically and intellectually empowered (here I don’t equate their empowerment with savarna power, I compare it with powerlesness of the scavenging castes, who don’t have any voice in any field) look at this occupation as an untouchable occupation and propagate the same, either to shun the occupation or shame the scavenging population for continuing the profession. Also, some educated Dalits try to brahmanise themselves. As a result, they tend to hold the scavenging population responsible for the plight they are subjected to. As a matter of fact, for the non-scavenging Dalits the scavenging question in India is a reactionary tool to accuse the non-Dalits of alleged subjugation of the non-scavenging Dalits. For example, a Paraiyar (Dalit caste in Tamil Nadu) will never recognize the fact that he abuses Arunthathiyars (Dalit caste engaged in leather working and scavenging in Tamil Nadu). However they took the question of manual scavenging to the UN, only to represent Paraiyar issues through the scavenging occupation. Another question is: what is the number of protests that the Viduthalai Chiruthaigal Katchi (VCK) had held in Tamil Nadu to address the issue of manual scavenging.

It is also to be noted that, as these non-scavenging Dalits embed brahmanism within them they also tend to symbolize anything associated with scavenging as untouchable. Hence the scavenging castes in India who always looked upto these non-scavenging Dalits who could not take up the broom or shit as a political weapon; rather they have been in the trap of emphasizing their own pitiable condition to gain sympathy from the others. But things are changing- a few years back, a few scavengers in Karnataka poured human excreta over themselves and protested. The Dalit movement should have seen it as a political message the scavenging population expressed. But the non-scavenging Dalit could not see the message of these protesters, and the scavenging population across India was also confused with it.

The Savanur incident is a turning point in the history of the Dalit movement – in particular, of the scavenging castes. It is also to be noted here that the only movement that has spread across the scavenging population is the Government programme introduced and spearheaded by the NGOs. I therefore do not consider Safai Karmachari Andolan as an NGO.

I argue that the scavenging population could not carry the broom as a political weapon and the other Dalit castes are least bothered about the plight of scavenging. Hence there will be many Gandhis and Modis coming out with such programmes. This act of Modi also valorizes sanitation and does not talk about the social stigma associated with it. Therefore those non-scavenging Dalits who are looking for some occupation might take up it up for livelihood as many public figures are taking up the broom in the streets.

Ravi Chandran is the founder of Dalit Camera. 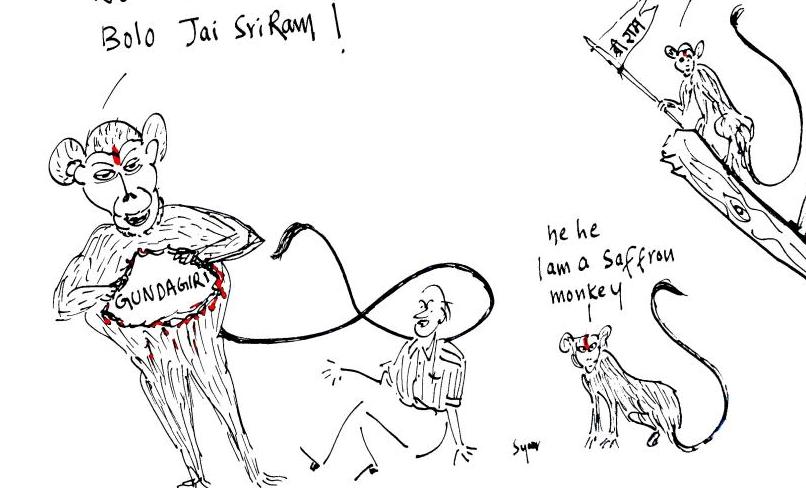