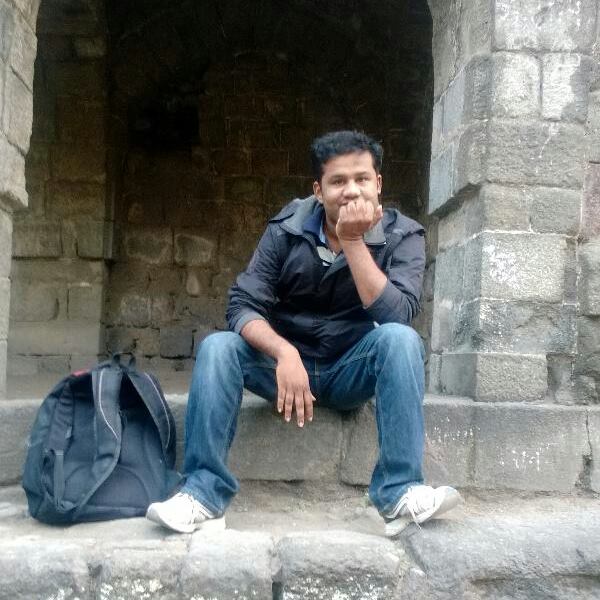 That led to some criticism which was conveniently dubbed as “abuse and hate mail” by Sardesai in a follow-up article2 on Hindustan Times where he defended the tweet and argued that it was not casteist.

Let us look at the very notion of caste pride. How do you come to have pride in your caste? And if there is pride for some castes, can there also be, say, humiliation for others? Does this pride have some bearing upon others’ humiliation?

Take names for example. As the Manusmriti says,

“Let [the first part of] a Brahmin’s name [denote something] auspicious, a Kshatriya’s be connected with power, and a Vaisya’s with wealth, but a Shudra’s [express something] contemptible. [The second part of] a Brahmin’s [name] shall be [a word] implying happiness, of a Kshatriya’s [a word] implying protection, of a Vaisya’s [a term] expressive of thriving, and of a Shudra’s [an expression] denoting service.” (Chapter II, Verses pp. 31-32)

So you see, the pride in the Brahmins came not just from being ‘good’, but for this particular brand of ‘pride’ to manifest itself someone else had to become necessarily ‘contemptible’.

Also, such ideas of caste pride for the savarnas fly in the face of historical and contemporary reality. Our mainstream liberals, along with their Sangh cousins, lead us to believe that there are no differences in castes, that only those who speak of caste promote casteism, and there’s no such concept of savarna privilege. We are taught to believe that the only possible existence of caste lies in reservations that apparently exist only to victimise the savarnas. 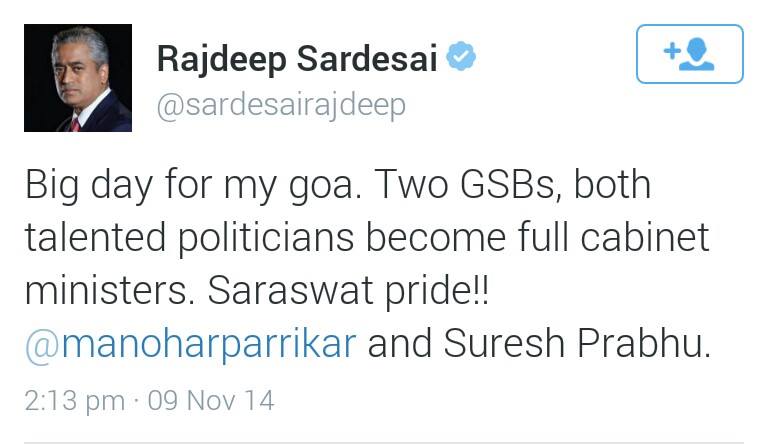 Do our liberals in their backyard of academia care to have a look at how many Dalits are among their fellow staff members? Hasn’t RSS and the Sangh Parivar always been about Brahmin leadership? Haven’t the liberals and the Hindutva folks found a common bond to share in their fantastical insistence that there’s not much of caste alive today? Disallowing any discussion on caste, the liberals go with the slogan “we all are Indian/human/sentient beings, nooo?”, and the Hindutva folks are not too different with their “we all are Hindus, noooo?”.

Or even the Communist Party of India, where the ones being jailed have always been Dalit-bahujans and the ones in power predominantly savarnas? As per a recent survey, just 5% of all Indian marriages are inter-caste and direct untouchability is still found to be quite prevalent in both rural and urban households.3

Yet most of this generation will tell you that caste is something like the ghost of Bloody Mary- it will appear only when you name it- else all is hunky-dory. In its most stupid variation, you’ll be told that being an atheist will cure you of being a Brahmin or a Dalit.

We are taught to use the universal logic: “all identity politics is bad”, Arundhati Roy goes “caste corrode us all” etc.

That the caste system affects (or rather, affected) everyone “equally”, or its equivalent that it’s “absent”, are frequent claims when one wants to do any of these three things:

1. Dilute the reality of oppression of lower castes and downplay the role of their caste status that led to these problems in the first place
2. Deny any role of privilege for the savarnas
3. Play the victim and displace the real victims from their victimhood.

Rajdeep Sardesai spectacularly manages to do all of the above three.

Sardesai quotes in his article, “GSB refers to the Gaud Saraswat Brahmins, a tiny, but highly progressive community of fish-eating Brahmins that I belong to…… how they faced oppression from the conquering Portuguese, how they zealously held onto their family traditions and village deities, and placed a premium on education as a path to upward mobility.”

So at the very beginning he’ll tell you, “hey, we are victims too, you know”. This is directly an offense to the lower castes for whom being victims meant far different and worse things than Sardesai’s callous comment would have you believe. Was oppression for the GSB’s, as they say, a ‘way of life’, as it was for the lower castes?

Also, we’re told that they “placed a premium on education”, implying that the others didn’t do so by their own free will. We’re asked to look at things as ‘ceteris paribus’.

When listening to the chants of the vedas could mean having molten lead poured down your ears, like the ati-shudras had to endure, you’d be a little more deterred in “placing a premium on education”. As far back as in 1911, in Bombay presidency, the literacy level for Brahmins were nearly 60%, when even the Maratha literacy levels were only 3% and the Mahars were 1%.4

But that’s what Sardesai and fellow caste-pride people do; for them all of privilege is magically transformed into “merit” (or eugenics too), and all of oppression, historical and contemporary, is not just neglected but also twisted, mocked. As Sardesai says, giving the appointment of two GSB’s as proof of the following claim, “there is still space for merit within a caste-driven polity”.

He goes on to make another mockery of the caste structure when he defends his statement saying that GSB’s are a bit under-represented in Cabinet ministry, again twisting the problem of “under-representation”. When Dalit-bahujans speak of under-representation, they mean under-representation in each and every sphere of life- in academia, media, land distribution, our narrated histories, in our mainstream culture, what gets to be ‘Indian’ etc., and it’s a space occupied precisely by the GSB’s and their savarna cousins. If Sardesai is so worried about under-representation (that is not just for GSB’s), then does he know that there are a multitude of castes among OBC’s and Dalits that have much larger population than GSB’s and have ridiculously lower representation?5

Sardesai writes, “It will still be difficult for political parties to distribute tickets at election time without keeping caste considerations in mind.”

Can he tell us how many tickets have been given by major parties to Dalits in non-reserved constituencies? Where are the caste considerations then? 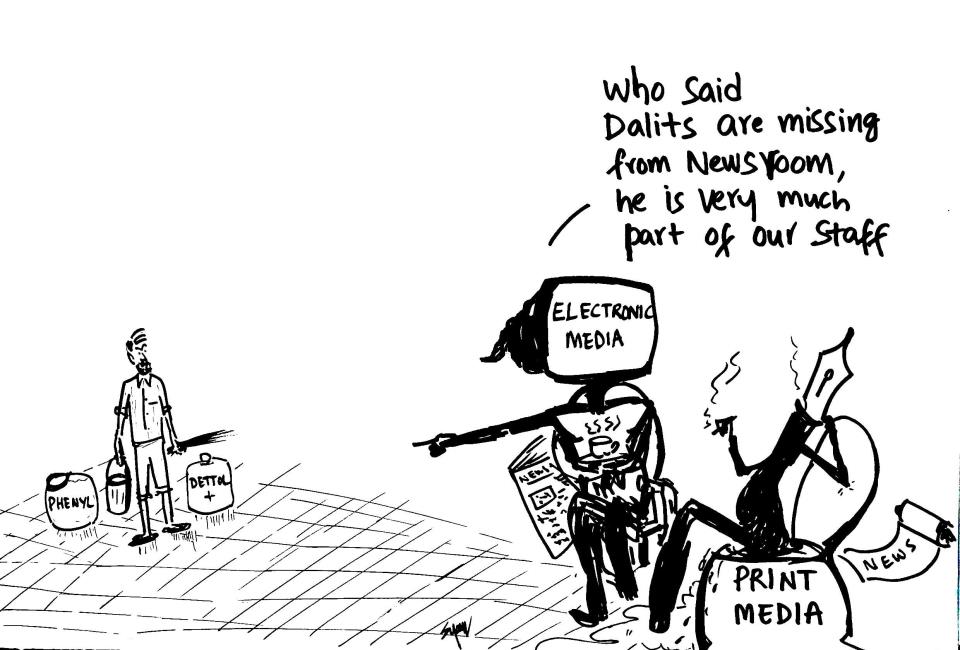 Let us take media and newsrooms. To quote from one article6, “Hindu upper caste men, who constitute just eight per cent of the total population of India, hold over 70 per cent of the key posts across newsrooms in the country. . .But the worst scenario emerges in the case of Scheduled Castes (SCs) and Scheduled Tribes (STs). Despite constituting around 24 per cent of the total population, their representation in key decision making across the news spectrum amounts to zilch. That means there is not a single SC or ST person taking a call on editorial policies in country’s news arena.”

Lastly, Sardesai defends his casteist tweet by saying that when Modi, who comes from a backward caste, won elections, his caste also demonstrated “caste pride”. Are these two things equal?

There are entire castes who have always had pride and praise handed over as birthday gifts, along with other castes whose pride and dignity were deliberately stamped upon in order to facilitate their easier enslavement and exploitation. Our sewage is cleaned without gloves from the people coming specifically from the ati-shudra castes, a fact that also was made into their identity. If someone from this caste becomes an IAS officer and is celebrated by that caste, they would be taking back what was systematically and forcibly denied to them. For them, it is just pride, which might sound like caste-pride to others, and it is something they’ve had to fight for after repeatedly being told and handed over the opposite. And Sardesai manages to give a reverse and perverse turn to this struggle when he equates his “caste pride” with what is for the Dalit-bahujans a struggle for identity and survival.

In the end what is being termed as caste pride turns out to be no pride at all but caste arrogance and social ignorance, denial. As Kuffir puts it7, “Indian history reads so much like mythology because those claiming its ‘glorious achievements’ as their own have no idea whatsoever how those achievements were accomplished– it’s obvious that they know only a part of the story, so they add a lot of mumbo jumbo to complete it, to obfuscate the Dalit-bahujan contributions. indian history is such a colossal crime because by depriving the Dalit-bahujans of any past, it steals their future too.”

As the orthodox Brahmins have defined it, Kalyug is the age when the “shudras and vaishyas end up playing the role of rulers, brahmins and kshatriyas are reduced to shudras, vaishyas impersonate brahmins for profit.”8

Well, there is little bit of truth in that. What is really happening around, and Sardesai’s tweet is the mildest example of it, is that the structure has remained the same as it was, but just the logic of privilege and oppression is being inverted in order to further oppress the already oppressed voices.

[5] “On Political Reservations for the Scheduled Castes: Reserved but Unequal?” by Hugo Gorringe & Suryakant Waghmore
Accessed at http://roundtableindia.co.in/index.php?option=com_content&view=article&id=7800:on-political-reservations-for-the-scheduled-castes-reserved-but-unequal&catid=119&Itemid=132 Accessed on 17th Nov, 2014 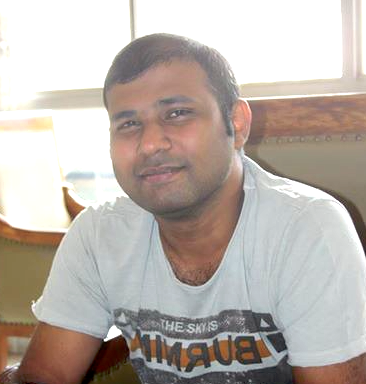