The recently concluded HCUSU elections generated a lot of discussion and debate both in social media and offline as well. Innumerable questions were raised and allegations were made against the Bahujan Students’ Front-UoH in particular and United Front for Social Justice (UFSJ) in general. In this pamphlet, Bahujan Students’ Front (BSF) would like to tell why it went as an alliance partner in UFSJ. Who was it that actually diluted the unity of oppressed communities? We would like to make the campus community aware of the hegemony of ‘Congress Chamchas’ who call themselves Ambedkarites.

This election (2016) was very significant as it was the first election in the aftermath of the institutional murder of Rohith Vemula and the struggle that still continues. BSF felt that this was the right time for all oppressed communities and organisations representing the former in the UoH campus to forge an alliance and send the strongest message to Brahminical forces in the campus and the country at large. With this in mind, BSF formed an election coordination committee of its own to mobilize support from all organizations representing marginalized communities. BSF representatives first initiated negotiation with representatives of Ambedkar Students’ Association (ASA) in forming the larger unity of the oppressed (UDA). The response from ASA was that forging an alliance of all oppressed communities (UDA) was risky when other forces are strong, cases are pending against students and creation of three panels would give mileage to ABVP. Thus BSF’s proposal of UDA formation was neglected by ASA. Further the formation of a grand alliance of all organizations which were uncompromisingly engaged in Justice for Rohith struggle was emphasized by ASA.

When the negotiation towards a grand alliance reached a deadlock with the tussle for President post between ASA and SFI, later ASA invited BSF to join UDA with NSUI and United OBC Forum at the last moment (the first day of filing of nominations at 1:30 a.m. to be precise). This meeting was also attended by journalist Sudipto Mondal of Hindustan Times. NSUI headed the discussion instead of ASA which was questioned by BSF. NSUI is a student wing of Congress and in HCU campus United OBC Forum is closely aligned with ABVP. ASA betrayed the spirit of UDA by attempting to form UDA with these two alliance partners. However, BSF representatives invited ASA to contest solely with BSF as an alliance partner without NSUI and UOBCF. This proposal never got any reply while ASA continued its dual game in which they kept negotiating with SFI. Hence it is clear ASA is power hungry and plays opportunistic politics and this attitude of theirs continued till the eleventh hour of withdrawal of nominations.

Now people who are pointing fingers at BSF’s alliance with the Left in the election should also learn of the previous alliances of ASA’s deep rooted Congressi hegemonic politics. The following table brings out the trajectory of both BSF and ASA’s alliances in elections. Here is a past five year record of electoral alliances in HCU- SU elections which will reflect who are the real Ambedkarites.

Herein, we would also like to narrate a bit of the background on UDA and prior alliances. United Democratic Alliance (UDA), the spirit of which was to forge an alliance of Bahujan groups against the Left and Right forces in whose initiation BSF took an active part. UDA was formed in 2013 where BSF aligned with TSF (Tribal Students’ Forum), TSA (Telangana Students’ Association), MSF (Madiga Students’ Federation), DSU (Dalit Students’ Union) and ASA also joined who were in an alliance with NSUI earlier. ASA contested for the post of President while TSF took General Secretary post. BSF contested and won for Vice President. UDA (BSF-ASA-TSF-DSU) contested second time in 2014 where NSUI later joined in this alliance. It is noteworthy that NSUI came into the alliance only due to pressure from ASA on the pretext that it would add another hundred votes to the vote count, while BSF expressed its dissent against the inclusion of NSUI. It is to be noted that the UDA lost more than a hundred votes only because NSUI was part of the alliance. ASA took President post once again while BSF took general secretary on the condition that it would be reversed next year.

In 2015, negotiations for previous alliance conditions broke down because as agreed in 2014 ASA refused to forgo President post and refused to be led by “smaller fraternal organizations”. In the meantime DSU and TSF formed an alliance with SFI. BSF decided to refrain from elections in 2015. ASA went on to form UDA with NSUI and OBCA and deceptively mentioned BSF in their campaign posters as part of the alliance knowing well that BSF had refrained to contest in 2015. On being questioned why BSF was added as alliance partner, the answer given was that it is Bahujan Students’ Federation and not Bahujan Students’ Front. We all know no organization by the name of Bahujan Students’ Federation exists in the HCU campus. This shows the duplicitous nature of ASA.

Questions to ponder on:

1. What is ASA in HCU campus? Is ASA only Ambedkar Students’ Association or an opaque alliance of ASA, SIO (Students Islamic Organisation of India) and MSF (Muslim Students’ Federation) supported by NSUI?

3. When BSF approached ASA for the formation of UDA this year why they did not respond in time? Why did they approach BSF only at the last moment when deadlock emerged in the talks of a grand alliance? How is their pleading for president post from SFI assertive when they had the opportunity of forming a unity of oppressed communities with fraternal organizations and leading it with self-respect?

5. On what basis are you claiming to be the single largest organization in the UoH campus? What about organizations like SIO, MSF and of course your backbone organization- NSUI? In 2014, NSUI was included in UDA despite great opposition from BSF and ASA’s association with NSUI has continued since.

6. In the 2016 HCU-SU elections ASA claimed that they contested for only President post while forgoing other posts due to the ‘love and affection’ they feel towards other ‘fellow smaller organizations’. Then how do you explain the huge number of NOTA and INVALID votes and simultaneous increase in votes for NSUI which tell a different story and expose not only their close association with NSUI but also indicate their intolerance towards the existence and growth of ‘fellow organizations’?

The above analysis clearly presents the efforts and commitments of BSF before and after elections. BSF is conscious of its ideological stand although it is in an alliance with other existing organizations.

In conclusion, BSF would like to make an appeal to the campus community and social media community not to be misguided and fall prey to one-dimensional narration of events before and after elections. We also appeal to the minority students organizations in HCU campus to be aware of the appeasing politics of Congressi-Ambedkarites and have their own agency in pursuing their politics. Since its inception BSF continued to unite All India SC’s, ST’s, OBC’s and religious minorities to fight against hegemony of left, communal forces as well as the Congress. We also remind certain individuals and organizations that during UGBM (2016) while BSF raised slogans of Bahujan unity and Jai Bheem, ASA top brass raised slogans of Students Unity and Jai Bheem, Lal Salaam which has to be seen in retrospect by facebook priests who are defending ASA. We take this opportunity to make the country aware of the real colours of this so-called Ambedkarites, of their close association with Congress while claiming to be sole torch bearers of Ambedkarism, and of their arrogant and hegemonic attitude towards other Ambedkarite organizations. 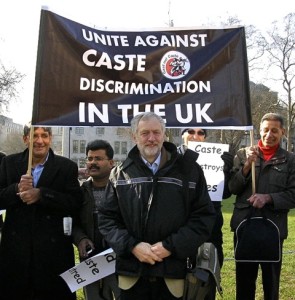