What do they know of Kathakali, Who they only Kathakali knows? Mistaken Modernities in Kerala

The cultural ecosystem in southern India, has been at the forefront of heralding an Indic future, from APJ Abdul Kalam on the Veena to TM Krishna performing live at the beaches of Kerala and TN, the southern matrices of intermeshed artistic borrowings have helped create a superstructural buklwark. This is supposed to keep alive the notion of an unending, continuous tradition whose flame has to be preserved at any cost for sustenance of tolerant notions of the Upanisadic ‘Vasudaiva Kudumakom’ as well as some sort of Harappan humanism.

The concept of ‘invention of tradition’ as propounded by Eric Hobsbawm and articulated in the modern revivalist efforts to claim an ‘in order to have been’ future anterior temporal status for South Indian cultural (Bharatanatyam, Kathakali, Kutiyattom, Carnatic music) , political (Tamil Cinema, Dravidian rhetoric), aesthetic (Akam-Puram classifications of Sangham literature) and linguistic forms (Malayalam as classical language) forms the locus of this study. How much of the de facto classical in modern south India, such as the classical status of Malayalam and its cultural ecosystem comprising Kathakali, Kutiyattom, Mohiniyattom etc, is classical at least in a Foucauldian sense, stamps of credibility from global arbiters such as UNESCO notwithstanding?

Humans as organic living forms have multiple existences, many of them are performative, so much so that a ‘performative turn’ is in the offing in theatre studies, just as biennale installations have gradually come to displace the conventional Ravi Varma painting from the gallery spacae. Martial art forms such as Kalarippayattu, shorn of their Buddhist loci of ‘attention as consciousness’ (Ganeri, 2018) are reduced to parlour tricks. Puritans of classicism and sticklers for taste find no harm in such appropriation.

The elite performing arts of Kerala are now coming into prominence with liberals of all stripes and persuasions taking up the cause of artistic freedom and sensibility. But Thiruvananthapuram or Chennai of 2020 is a far cry from the Paris of 1968. ‘Freedom’ is just a seven letter word, in performance and elsewhere. Its organic moorings are but fallacious. Just as Bhakti served the cause of revivalism during the theoretical turn in critical theory, despite protestations to the contrary arising from heralders of a renaissance, Classical ritual dance forms have come to represent the performative Indian tradition in the 21st century. The reification of older folk practices and popular forms and their calcification in certain theoretical regimes such as ‘rasa’, become fetishized in their very enunciation. Commentators such as Sunil P Ilayidom are minutely conscious of the constructed nature of India’s classical heritage, post-independence.

A formal aesthetic understanding of the classical in South India, as demanded by scholarly elicitations for rigor such as in the oeuvre of Sanskritists from Kunjunni Raja to C. Rajendran, constitute the blind spot in academic understanding of Durkheimian social facts. The Roger Casement-like figure exposed the brutalities of the early modern feudal paddy regime in Kerala and elsewhere in Southern India. Impalations were accepted as forms of punitive justice. The performative regime revealed the grotesquery of this feudal power. The past, and its cultural manifestations, cannot be retrieved without acknowledging that. The pre-modern penal regimes that exacted a horrible toll in terms of sexist retribution, spectacular humiliation and pain in the form of impalations, public pillorying etc are post factually invested with a certain romantic aura of aesthetic and cultural sensibility that serves to wash off the recrudescence of cyclical caste formations throughout the ages.

As that great contemporary inheritor of classical Keralan sensibilities, Arundhati Roy says in her book ‘The Ministry of Utmost Happiness’, ”normality in our part of the world is a bit like a boiled egg: its humdrum surface conceals at its heart a yolk of egregious violence’ (Roy, 2017). The grotesquery of violence animates not just the Sanskritic pseudo dance forms such as Kathakali and Kutiyattom, but also the present day performance installations like Kalarippayattu. (The antedecents of Eastern and South East Asian martial art forms is fabulously traced back to a Malayali genealogical progenitor in many fallacious narratives, that strive to displace Buddhist-Shintoist narratives with a Vedic one. The same is applicable to Aryanisation of Ayurveda through the interpellation of the Vedic ascetic Agasthya, thus disinheriting subaltern medicinal knowledge of its originary locus.) In a profoundly Joycean sense, the past is a nightmare that Southern India is still trying to wake from.

TM Krishna, cultural hero of the liberal Malayali elite, is perhaps the most dangerous musician alive in the world. But the quest for justice and egalitarianism via the classical axiom, as explicated in the musical articulations of the likes of TM Krishna, though well-intentioned, poses the danger of foisting the tremendous baggage of another invented tradition, cleverly exploiting the untapped liberal bandwidth for praxis, which is submerged in contemporary thought and cultural theory. Cultural studies theory has to perform certain somersaults and contortions on its passage to Indian shores, from Stuart Hall’s racial cauldron of colonial appropriation, before arriving at the axiomatic Indic narrative-normal of TM Krishna. Hybridity of any form is anathema here. The value most stressed upon is the ‘neutrality’ of the performance. The occidental oblivion of its colonial past is mimicked by the caste orient’s systematic appropriation and annihilation of its subaltern folk cultural superstructure into mediatized classical in the form of Malayalam language, Sanskritic literary ethos and Brahmanical corporeal performative logic. Neutrality here is but another name for confirmation bias.

‘Kutiyatttom’ with its screeching sounds and suppressed eroticism and irreverent humour, with temporal caliberations belongs to the same ecosystem as ‘Theyyam’, the great performative folk ritual of northern Malabar. Though the ‘folkness’ of the folk is often harnessed in the service of social integration, this is conceptually framed to serve a subordinate role to the less egalitarian performative forms of Kathakali and Kutiyattom. William Dalrymple with characteristic pseudo aristocratic flippancy refers in feline terms to the ‘nine lives’ of the Theyyam performer. Theyyam is certainly an older and primordial performative form, whose genealogy can even be traced back to the Neolithic cave etchings of Edakkal caves in Wayanad district of Kerala. Life in its vital organicity is enunciated in myriad forms. The critical organicity, through which multiple perspectives are enunciated in performance is linearized in the hegemonic appropriation of the subaltern by the elite. The invention of the elite tradition is not a value neutral and harmless process, but one which often involves within its intricate meshes the subjugation and suppression of folk religiosities and identities. The flip between the ‘little’ and the ‘great’ (as classified by Robert Redfield) in the Indian context, inevitably stabilizes towards an axiomatic neutral position favouring the ‘great’. The very terminology is problematic here.

The southern caste elite wants to be Aryan and Jew at the same time (a bit like Brevik the Norwegian murderer who for all his antisemitic rants, was a votary for Israel). The desire to be modern while retaining the traditional ‘classical’ valences has a certain aspirational cachet for the elite. This is what is wrong with casteism and multigenesis. Received wisdom conceives monogenesis to be linear. But monogenesis exactly means the other way round. If you have the same source, then you invariably grow in independent, mutually exclusive ways. Semitic Monogenesis, of having a single source, is a very plural concept. Thus the genealogies of semitic kinship are not linear. Thus the classical did not grow into the modern, these are radically different trajectories. Classical is not the gold reserve: bullion for the currency of modernity. The ‘classical’ status of Malayalam as a language is the greatest hoax, based on which the charade of southern classical elitism is foisted. 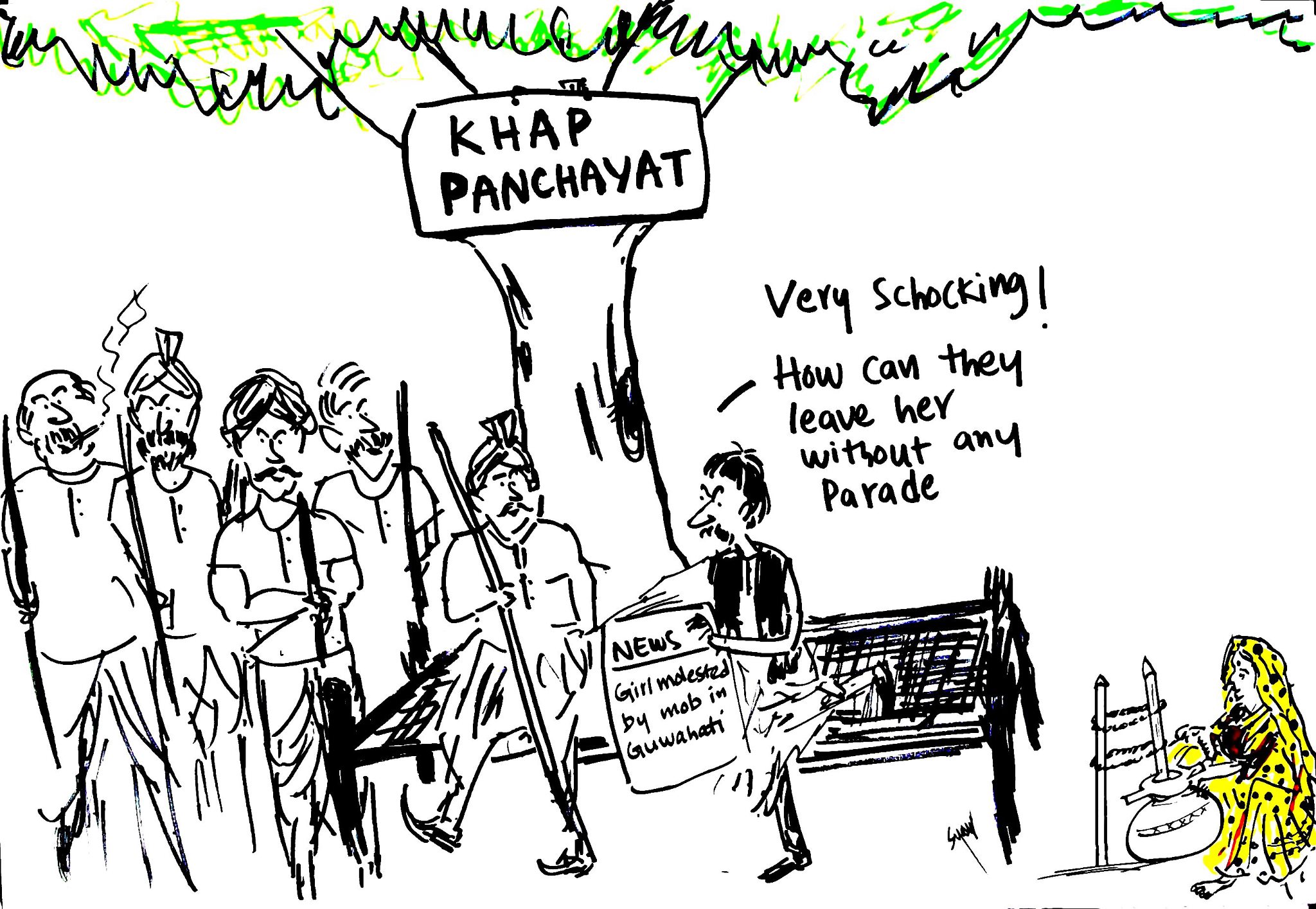