I have a major deadline to meet next week, and this must be why all those things I feel I should write come to me at this moment.

Below is a screenshot from the movie Kammath & Kammath that released in Kerala in 2013. Before I go further, let me explain that I don’t imagine for a second that the antics of the brothers in the movie might be an authentic representation of Gouda Saraswat Brahmins (GSB) or Kammath families and their body language. I am merely drawing attention to the story line and the corresponding visualization, the master narrative that can be seen not just in this, but many Malayalam movies.

In this scene, Mr Kammath, a GSB, sits watching his trusted assistant (in checkered shirt) beating up the enemies who want to stop him. The enemies, not surprisingly, have been sent by a Muslim restaurateur. Kammath is on his way to inaugurate his pure vegetarian hotel that serves different varieties of dosa. He is taking over from another Brahmin who has been wronged and put out of business by the Muslim man, and the reason he is taking over is because the land where the hotel stands cannot be sold to the Muslim restaurateur who is interested in buying it: there is a deity of Ganapati there. This deity requires pious (read Brahmin pious) worship and the ageing Brahmin landowner cannot bear to see it polluted.

Mr Kammath being a GSB, believes in non-violence (ahimsa), and therefore, will not beat up anyone. Between himself and his younger brother Kammath, they share a revolver and its bullets to detract enemies, but neither can shoot really! His trusted assistant is fed on a diet of beef, mutton and all other non-vegetarian food although the boss is a total vegetarian. This assistant has been picked up when he showed the Kammath brothers the man who ran over their father disabling him, thereby displaying a certain loyalty and honesty. He helped beat up the culprits in revenge, because GSB’s are, er… historically non-violent. The caste of those who are fighting among themselves is not revealed (or may be it is, in the later part of the movie, but this was too obnoxious to watch) but their food habits, body language, and violent bend of mind defines them.

We now need to ask: what is violence? Is someone who controls when and where and against whom the trigger is pulled, less, equally, or more guilty than the one who pulls the trigger? And is it important to name the trigger man and/or as the perpetrator of the violence? What is the ethics of condoning violence that is unleashed only to benefit a handful of individuals even as denouncing in the harshest words, those who implement it on their behalf?

To be honest, I do think that in the minds of most people, these questions should already have been resolved.

Therefore, what is interesting is the possible reply: that Kammath brothers are only retaliating for the violence of the Muslim restaurateur. Here is where we have to look closely at how this (and every other movie with similar tropes) are set up. There is a history for the ambition and success of the GSB brothers, having a paralyzed father who cannot earn for the family any more. There is an even longer and older history to justify the GSB ambition and success, shown at the beginning of the movie: persecution by the Portugese forcing them into slavery, and to disperse from Goa. Unfortunately, the Muslim villain and the other goondas in the movie are denied the benefit of this history, and their own personal narratives. What is there to say? Villains are born and bred in villainy. Their past, vastly unrecorded, can be nothing remarkable and remotely interesting.

This is why I find this particular screenshot and in fact, the whole stunt sequence for those who can watch it (between 25:32 and 29:25 in this link here) superbly revealing. The goons are waiting with their weapons on a highway and Mr Kammath’s car is waylaid. His driver-cum- servile assistant first gets out of the car, talks to the goons, and later asks his master to come out. This is the scene when Mammootty makes his entry into the movie as the hero. The camera moves to show him emerge from the car, wearing a row of traditional gold rings on his fingers, a red vermillion dot on his forehead, a red-stone (ruby?) earring on his right ear, gold-rimmed spectacles, a golden watch, and golden-bordered kasavumundu paired with a blazer: all insignia of his power.

In a brief, witty dialogue with the goons, he says, he doesn’t beat up goons, but he is rearing a ‘buffalo’ on a diet of beef, mutton, chicken to do that on his behalf: the servile assistant Gopi (played by actor Baburaj). After a brief exchange, he turns and walks back ordering Gopi to take care of the business, and so he does, the first display of which is the screenshot below, where he expertly blocks two swords aimed from behind at the neck of Mr Kammath.

Supremely confident that Gopi is going to take care of his attackers, Mr Kammath then proceeds to sit atop his car, his legs crossed, and opens a gold-and-wood carved box with his betel nuts, leaves and lime, and slowly makes a paan for himself.

All along, the background sound changes to classical karnatic music when Mr Kammath is in the frame, to the sounds of dishoom-dishoom when the goondas are in the frame, and once, even to the call of a bovine animal when he refers to Gopi as the buffalo he is rearing. Like an overlord, he calmly sits atop his car as men marked out as dalitbahujan fight, presiding over the whole scene, and signaling and gesturing to his servant Gopi at critical points to save him.

This stunt scene ends with the dialogue to the petty goondas who were sent to attack him: “What were you thinking? That when my man gets thrashed up, I will fight you myself? Fool! Keep that to yourself. I don’t fight every Tom, Dick, and Harry (aappamar and ooppamaar). Anyway, let that be. Now, tell me who sent you here? Let me know. Just let me know.”

Here, Mr Kammath is setting up a worthy opponent for himself, dismissing the local goons as not game enough. Inherent in that dismissal is a savarna disregard for the goons as not deserving of his attention, but seeing no contradiction in ‘rearing’ one for himself, as if they were cattle, not human beings. Inherent in that statement, is also an acknowledgment of his Muslim hotelier as the enemy he would like to deal with.

I thought this visual sequence is a good illustration of not just violence, but particularly caste violence in operation, where the Brahmin sits at the top reaping the rewards while the small fry fights and loses his life to preserve Brahmindom, in a devotion that surpasses love for his own life. This is why the GSB Kammath can claim nonchalantly that his community is ‘historically non-violent’ because caste-violence is normalized, and the man who pulls the trigger seems to be in their logic, the violent man. And not the man who decides who, when and where the trigger is pulled. What does this tell us about the Brahmin world view and notions and indeed, their capability for understanding justice?

This sequence also illustrates how such violence, sanctioned by Brahmins is continuously masked by constructing discourses of Brahmin’s pain presented as historical and personal narratives of pain, whereas such narratives of dalitbahujan people’s lives and histories are constantly deemed unworthy of any systematic reclamation or attention.

Sruthi Herbert is a doctoral candidate at SOAS, University of London. 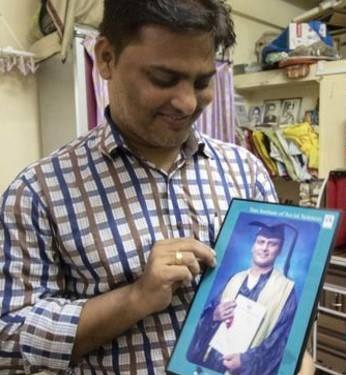