(Following is a rough transcription and translation of Rahul Sonpimple’s speech for the Presidentital election at JNUSU delivered on 8th September, 2016. Parts of the speech had to be omitted owing to lack of a fully audible video and disturbances)

To all the people that have come here for the debate, especially after the attack on 9th of Feb, by the RSS, from within and outside the campus, that showed RSS its true place- I salute them and Jai Bhim to all. I wanted to share something. When I had filed my nomination, I was slightly upset. I felt that against the people against whom I had filed the nomination- these people whose Godfathers who are sitting at various places, are stronger. But when I was coming out after filing the nomination, a friend came towards me. He told me “Brother Rahul… take these fifty rupees. Your organization may be small in size. It may not have a Godfather. Therefore you keep these fifty rupees (as contribution) and take this fight ahead.” I want to salute that person who boosted my confidence by saying that.

Friends, as we know, there are Mothers in Kashmir, who are asking the government- ‘when are our sons coming back? – my salute and Jai Bhim to these Mothers. I want to salute my Mother, who would keep bricks on her head while working in the extreme heat of Nagpur, but had dreams that I would do something for the oppressed society. I want to salute people from the LGBT community, that have explained what heterosexuality is and how the sexual privileges operate in our society. I want to salute the women from Manipur who have fought against the rape of Manorama and protested against the army. I want to salute my partner and all the women friends who showed me how I am a patriarch and how patriarchy can be overcome.

Friends, people say that elections are happening in this era and that era. I say wherever the Women, Dalit, Muslim, OBC, oppressed section are there and are standing against RSS- the election is happening in all these places in this era. The Women, Dalit, Muslim, OBC, LGBT people have told these people that their treachery will not last much longer. I have been saying that the first blow to these communal- fascist forces will be given by the women from the oppressed communities of this country.

Friends, I want to tell you that these are the very people who killed Rohith Vemula, who murdered Rohith Vemula. Now they are debating whether he is a Dalit or OBC. I want to tell you friends, that whether Rohith is a Dalit or OBC, please understand one thing, today this country’s every backward person, every muslim, every dalit, every Kashmiri, every person who believes in progressiveness, that each person is standing against you, even if Rohith is Dalit or a non-Dalit. Friends, it is because of our movement, because of the country’s progressive people, today these people have started wearing full undies instead of half-pants! Friends, I want to warn these children of Dronacharya, I want them to keep one thing in mind- now you are wearing full pants (trousers), in sometime, you will also start to wear Satrangi colour because you are such opportunists. Your situation is going to be very bad!

Let me tell you about AISA. That AISA that used to talk about Tapasi Malik’s murderers, about the oppression in Singur, now it is standing hand in glove with their opponents. But every woman that understands gender justice is now standing against you. These people say please don’t vote for BAPSA, otherwise ABVP will win. Similar to Gabbar will come. How long will Gabbar happen? I say his time Gabbar won’t come, Kabali will come!

There is a new wave happening from Una to Rohith Vemula. That wave is the Ambedkarite movement. I want to appeal to all that in the coming times anyone from the oppressed section, the Dalits, Muslims, Kashmir, Gorkhaland, OBC, Kashmiris, friends from North East, will talk of the word of equality and uproot these fascist forces. If these people think that anyone from oppressed section talks of progress, then he is a Marxist, then yes, they are Marxists. If you think he/she is an Ambedkarite , then yes, he/she is an Ambedkarite. That person is talking about equality. We don’t want to have a dialogue with RSS/ABVP but with people who call themselves progressive. If you look at the campus, apart from Urdu LLB, the percentage of Muslims studying is almost nil. What kind of progressives are you?

A girl who has to come here only to study from a remote village, fighting against the family whoi wish to get her married, she has to drop out. This is a shame. What kind of progressives are you when such things continue to happen? You are the same people who at one point would be fighting for Tapasi Malik and Nandigram issue. Seems now that for you her blood has turned to white from red. I remember the line of a popular film song after seeing SFI : “After how many days has the moon appeared?” Seems you will get one seat in the Central Panel. Look at how you ruled in Bengal for so long. The condition of Dalits, Muslims, Adivasis, etc. is deplorable. The Sachar committee report says that among all states, the condition of Muslims in Bengal is the worst.

The whole oppressed section is against you and you will come to know of this in the election. They will teach you a lesson. In Chithralekha’s case, the CPI, CPM, SFI goons go to her place and burn her autorickshaw, her house, and threaten her with rape. There is no difference between them and AISA. This is the same AISA that blames the rape victim and defends the accused. This is their record. They are greedy people hiding under Red Faces. Even with the Red-Bhagwa (Saffron) people, I want to share something. This is the same day when Dr. Babasaheb Ambedkar had roared in the Round Table Conference for Separate Electorates. Today, I, while remembering Babasaheb am roaring that, from today onwards if anything will be spoken, it will be of unity of the oppressed.

In fact, you people are not even worth to be spoken with. I want to ask the woman candidate from ABVP who is talking about rape, do you know what is written in Manusmriti? It is written against you (Women). I wish that one day you will read it and then dump ABVP and join the progressive camp. Let me now read our main agenda. We have so many students that come from poor families, from slums. They leave their houses and come. Their drop out rate is high- be it Sciences or Social Sciences. We want to end this dropping out. This is not a claim, this is a promise. The time has come to defeat these both: (a) these Opportunistic forces and (b) These Bhagwa (saffron) forces.

Another point is Minority Deprivation Points. Let me tell you that if the Minority Deprivation point is not allotted, then I promise that all 4 Gates of this campus will be closed. This is a promise from an oppressed to another oppressed. It is well known that the SC/ST/OBC/Minorities only get 0-3 marks in Viva Voce. I want to know those people who get 15-20 marks in viva-voce, which river water do they drink, which flour mill’s flour do they eat? JNU will only become progressive if the person who comes here from extreme poverty and difficult circumstances and gets admission, it will become progressive only when follow our duty to let him/her respectfully be able to complete his/her studies and complete his/her degree. But this doesn’t happen in this campus. These (AISA) people say that they are so and so, but I would say defendants of a rape accused, your name is AISA. The racial biases that has entered the campus against Dalit, Adivasi, Muslims, North East, Kashmiris calling them as Anti-National- the fight will be against them. There are two kinds of oppressors- one is Saffron (Bhagwa) and the other is Red (Lal).

Translated from Hindi by Vinay Shende.

Rahul Sonpimple (BAPSA) ( rahulsonpimple@gmail.com) is an M.Phil candidate at the Centre for the Study of Social Systems, JNU, New Delhi. 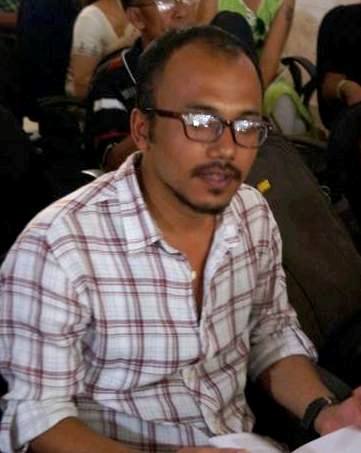 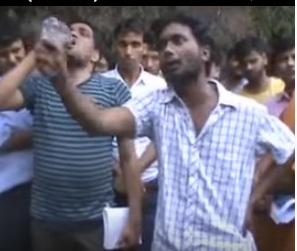