The occupation of the Indu Mills near Chaityabhoomi in Mumbai by dalit youth demanding that an Ambedkar memorial should come up there is a heartening development. In neo-liberal India, dalits are a significant part of the “precariat” – a section of the people with no job security, indeed, with no prospect of employment, and hence, ready to take on the risks of plunging into the struggle for a better world. Today it is Indu Mills; tomorrow it could be India!

Vested interests have never been known to have willingly divested themselves unless there was sufficient force to compel them. – B R Ambedkar.

Six December is a special day in Mumbai. Despite this what happened on the last one was very unusual. Some 700 youth belonging to a little known Republican Sena led by Anandraj Ambedkar, the youngest grandson of Babasaheb Ambedkar, broke the police barricade, gatecrashed into the National Textile Corporation’s (NTC) Indu Mills and forcibly occupied it by constructing a makeshift Buddha Vihar there. They have since declared that they will not leave until convincing steps are taken by the government towards building memorial for B R Ambedkar on the land. This is a demand that has been pending for nearly two decades. For the dalits, mired in constitutionalism, the act portends a radical shift in their politics and, consequently, new possibilities of change in the country.

Babasaheb Ambedkar is a veritable phenomenon. His popularity and appeal have been increasing every year since he passed away on 6 December 1956. No other person anywhere is commemorated by millions of people voluntarily congregating at his shrine to pay homage on his death anniversary and a few other dates connected with his life. Besides, given his contributions, he deserves to be ranked among the founding fathers of the Indian republic. This – in the light of literal neglect by the ruling establishment for years until it realised his electoral importance as the icon of nearly one-fourth of the population – makes him unique in the annals of history. That there has not been a mentionable memorial (except for the ones built by Mayawati) in his honour in a land where the State voluntarily builds and maintains grand memorials for even petty politicians is indeed surprising. Mumbai, where he lived in a chawl from his school days until he shifted to Rajgruha, the majestic house he built in Hindu colony in 1931, and from where he began his movement, would be the natural place to have such a memorial. The issue of converting Rajgruha into a national memorial has been skilfully manipulated by the likes of Sharad Pawar to play one dalit faction against the other and eventually decimate the dalit movement in the State.

In the 1980s, the tenants of Rajgruha had been offered alternate housing in Bandra and the Ambedkar family a plot across the road that belonged to the railways. The chief minister then was Sudhakarrao Naik but before the decision could be sealed, Sharad Pawar became the chief minister. His political intrigues willed otherwise. The plot was eventually given to the policemen’s housing society as “revenue land”, in a scandalous manner quite like the infamous Adarsh Society. Nonetheless, with it the possibility of Rajgruha ever becoming a memorial also came to an end and the focus was deflected to the 12.5 acre of land that fell vacant after the closure of the NTC’s Indu Mills. The idea of building a memorial for Ambedkar on this land, which is contiguous to the Chaityabhoomi, was first mooted by the former Prime Minister Atal Behari Vajpayee in 1997. Since then dalit outfits have occasionally raised the issue as the Congress-led governments at the state as well as the centre prevaricated over it.

On the eve of elections to 19 municipal corporations, including Mumbai, Ulhasnagar, Thane and Nagpur, early next year, expectedly, the issue came to the fore on 6 December. Vijay Kamble, who heads the Samajik Samata Manch, a dalit wing of the Nationalist Congress Party, went on an indefinite hunger strike since 3 December. Ramdas Athawale, who did nothing while he was with the ruling party during all these years, initiated a struggle over the issue in a desperate bid to test his new alliance with the Shiv Sena. The show, however, was stolen by a little known apolitical youth outfit called Republican Sena. It had threatened the government of direct action two days before and executed it smartly by storming into the heavily barricaded mill premises. Its activists have since been occupying the premises by creating a makeshift Buddha Vihar inside and resolved that they would not leave until the demand is met. The action received wide publicity but is yet to be taken due note of insofar as its political portents. Surely, this action did not have a precedent in the record of the dalit movement, which has been largely state-friendly and fraught with what may be called constitutionalism.

One could go back to the very first struggle waged by dalits for their civil rights on 20 March 1927 wherein they were attacked by orthodox Hindus for having defiled the Chavadar tank. What followed was the satyagraha in December 1927 which was blocked by court injunctions fraudulently obtained by some caste Hindus. On both these occasions, Ambedkar avoided confrontation with the State. This was his well thought-out strategy in the context of the goal and the configuration of the struggle. But dalits misinterpreted it, conceiving of the State as their benefactor, or, at the least, a neutral arbiter. After the Mahad satyagraha of 1927 for temple entry, such satyagrahas that happened with Ambedkar’s tacit approval ended inconclusively but avoided confrontation with the state. Dalits organised numerous demonstrations and protests but never any direct action. Later, when the Constitution – Ambedkar was the chair of its drafting committee – came into force, dalits assumed that the goals and functions of the State were ordained by the will of Ambedkar. His early exhortation that they should shun agitation and adopt constitutional methods stuck and it is this political culture that has informed collective dalit behaviour over the last six decades. The State was seen as a dogooder, patron, protector, and an unbiased referee. The emerging middle class of dalits developed this conception into a political art of whipping the abstraction of manuwad while befriending the real oppressor in the form of the State. They utterly failed to comprehend its class character.

Despite the persistent contrary experience, they kept running after a constitutional mirage. They were deprived by every successive state policy but viewed the consequences as mere aberrations. The neoliberal bulldozer devastated them but they still believed the word of the State that it was good. The occupation of Indu Mills is the first action that reflects some kind of awakening among dalit youth to the reality around, an indication that they have now realised that what they have been hankering after was a mirage.

Hurdles from the Vultures

The action on 6 December has many positive features. It has mobilised dalit youth. Its leader, Anandraj Ambedkar, has insisted that there are no electoral motives behind the mobilisation. Therefore, the Republican Sena is apparently not available for familiar political parleys. The occupation reflected astute planning and execution. One may cynically say that it succeeded because the police did not use force for fear of the consequences. Any precipitate action on their part could have incited millions who had come to the Chaityabhoomi on that day. The involvement of Ambedkar’s grandson and the nature of the issue also deterred the police from acting because it could easily have turned into an emotionally charged conflagration. And, the timing, on the eve of the winter session of the assembly and the corporation elections, certainly helped. Indeed, many more things could be said about the precise stuff that strategies are made of. Choosing an opportune time and a constellation of favourable factors are important aspects of strategy, which is what makes this action, the occupation of Indu Mills, distinctive. Now, in order to sustain the agitation the Republican Sena has to win mass solidarity.

Already the established dalit politicians are clamouring to take credit for the occupation or sabotage it. They all claim participation of their followers in the agitation. They are trying to get into the limelight with some kind of action in order to dilute the credit that has come the Republican Sena’s way. Athawale created an unnecessary ruckus on 15 December based ostensibly on the statement of the minister of state for textiles in the Rajya Sabha that only four acres would be spared for the Ambedkar memorial. His people hogged publicity by indulging in breaking and burning inside the mill. The other dalit leaders are also desperately vying with each other for media attention so as to claim credit for the imminent success. It is important to know that the State favours established politicians because it can easily negotiate with them. Although, both in their organisational name as well as their leader, the agitators may not be entirely untrustworthy, in their maverick action they certainly display spontaneity. What the situation demands is mass mobilisation by the Republican Sena at Indu Mills and a sidelining of the discredited dalit leaders who want to hog the limelight.

Prowess of the ‘Precariat’

The only dark lining on an otherwise inspiring act is the issue itself, which is rooted in identity and emotions around Ambedkar as a demigod. The State is adept at manipulating both to neutralise dalit anger and pave the way for their further dispossession. As a strategy, it may be alright to mobilise around the issue of the memorial to start with but it should soon be extended to tackle the material deprivation of dalits. The Republican Sena should not squander the gains of this agitation and lose its new-found direction.

Dalits have been victims of their poor self-image induced by the caste system and caricatured by others. They have overcome it to some extent through their struggles. Capitalist development has thrust them into the ranks of the proletariat and the current phase of neo-liberal globalisation has reduced them to a “precariat”, to use economist Guy Standing’s term – a neologism derived from merging precarious with proletariat, referring to people with no job security, or no prospect of employment. This very status makes them potentially dangerous. The precariat must realise that they really have the potential to change the world. The strategies for future struggles must be conceived from this position of strength. Today it is Indu Mills; tomorrow it could be India!

(On 22 December, the Maharashtra government told the Bombay High Court that it would try and settle the issue within a week. The high court had castigated the government for allowing “blatant illegality”. The matter has been adjourned to 4 January 2012.) 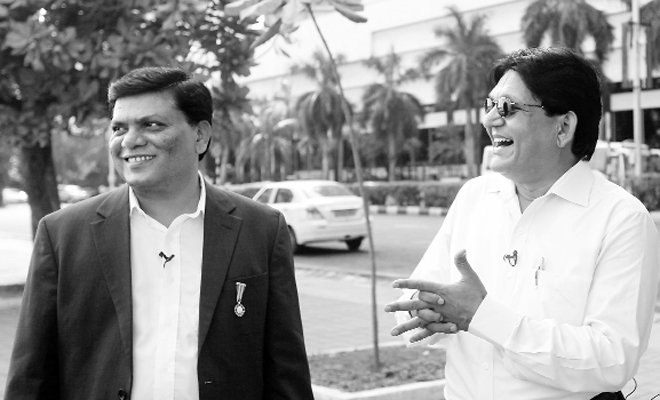