The celebration of the arrest of the prime accused in the Junaid Khan case as a kind of closure is very troubling and playing right into the hands of Hindutva politics. We would do well to remember that after the increase in the spate of violence in the name of cow protection, the Indian state was on the backfoot especially with the international shaming, as agencies were picking up on the obvious violence and the linkages between the government in power and the cow vigilante groups.

The Junaid case gives the government of India a breather – because for the first time – in the public eye there is a lynching by a group whose antecedents cannot be traced to the extended arms of the RSS family. So, of course the state swung into immediate action and the main accused is already behind bars. The government that has been silent so long when the Parivar elements went on a rampage has been issuing statements against citizens taking law into their hands in the name of cow vigilantism. Remember there was a lynching immediately after the prime minister made a statement against cow vigilantism on June 29th – about which the noise and the speed of justice has been slow in comparison. The victim’s families are continuously at loggerheads with the establishment.

My political instincts clearly say that his trial will be fast and efficient – for it is very clear that Junaid provided a useful safety valve for the Government of India in an atmosphere rife with threats of imminent violence against Muslims and Dalits – a safety valve which the government will spare no efforts in showcasing to the world to demonstrate its objectivity in sternly dealing with the law and order situation. The Basirhat violence will be tied along with this and this will be put across by a compliant media as the governmental largesse towards an ungrateful and fanatic Muslim community which gets instigated into violence at the slightest provocation. As an aside, the sheer political dividends of Basirhat not just in terms of a potentially polarized West Bengal vote bank, but also in terms of the frenzied Muslimophobic discourse makes me tend to believe the theory that Basirhat violence was staged by the RSS.

Coming back to Junaid, while his murder became the safety valve for the Government and the Sangh Parivar, what are the implications of the incident for the average Muslim? Let us not pretend otherwise and recognize that the ease and impunity with which Junaid was killed is an unofficial declaration of what was hidden and in wraps – that in many parts of India – Muslims are clearly second class citizens. A Muslim cannot afford to disagree or cross the path of someone from the majority community without the fear of being hurt – for it is allowed. That is the impunity that spurred Junaid’s killer.

Kamaldeep Goyal, the investigating officer from the Railway police in recreating what happened during the fateful day, clearly says that the fight started over a seat. And the main accused wasn’t even part of the scuffle. It escalated into mob violence because of the markers on Junaid and his companions that identified them as Muslims. Everybody wanted a free hand – and the onlookers perhaps thought they deserved it or simply couldn’t care less. But yes the message is clear that if you are a Muslim and get on anyone’s nerves – it can be safely presumed that you will be at least beaten up without being questioned. Very similar to the patriarchal excuse that women provoke rapes, the hindutva chants Muslims provoke violence! In other words the violence has become so normalized that it doesn’t seem relevant to take note. In short, Junaid unwittingly becomes an historical marker exonerating Hindutva of the hatred that it has unleashed against Muslims while normalizing violence against Muslims and sending out messages to Muslim communities across India to be aware of their place in the Hindutva scheme of things. I foresee a time when we completely stop noticing the violence against Muslims the way we do not notice violence against Dalits or Adivasis. This is exacerbated by the fact many of those who are protesting this violence can’t see violence against Dalits and Adivasis and would also not see the violence against Muslims the moment it loses its discourse sheen. I strongly believe that it will be hypocritical to externalize all of this – because of our participation at varying degrees in the manufacturing of Muslimophobia – Muslims included.

I will end with a note about a story I heard from my cousin yesterday. Along with seven of his friends – all Muslims – they decided to start an industry in Kerala. Idealistic men, they had decided on two things, that they wouldn’t take a loan or give a bribe. Their travails with the setting up of the business aside – which is a story by itself – they had paid an advance of INR 1,00,000/- for the lease of a plot of land, and for the purpose of environmental clearance needed signatures of no objection from the 10 households that were in the neighborhood of the proposed site. Since it was a harmless industry – 9 of the householders signed. The tenth, a BJP worker refused unless he was paid INR 10,00,000/-! Then all Muslim entrepreneurs decided that they’d rather shift the site of their industry and lose their advance than deal with a BJP cadre in the neighbourhood! 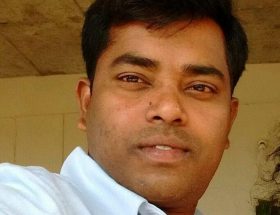