In 1935, Ambedkar was appointed principal of the Government Law College, a position he held for two years. Settling in Mumbai, Ambedkar oversaw the construction of a large house, and stocked his personal library with more than 50,000 books. His wife Ramabai died after a long illness in the same year. It had been her long-standing wish to go on a pilgrimage to Pandharpur, but Ambedkar had refused to let her go, telling her that he would create a new Pandharpur for her instead of Hinduism’s Pandharpur which treated them as untouchables.

His own views and attitudes had hardened against orthodox Hindus, despite a significant increase in momentum across India for the fight against untouchability. and he began criticizing them even as he was criticized himself by large numbers of Hindu activists. Speaking at the Yeola Conversion Conference on October 13 near Nasik, Ambedkar announced his intention to convert to a different religion and exhorted his followers to leave Hinduism.He would repeat his message at numerous public meetings across India.

In 1936, Ambedkar founded the Independent Labour Party, which won 15 seats in the 1937 elections to the Central Legislative Assembly. He published his book The Annihilation of Caste in the same year, based on the thesis he had written in New York. Attaining immense popular success, Ambedkar’s work strongly criticized Hindu religious leaders and the caste system in general. He protested the Congress decision to call the untouchable community Harijans (Children of God), a name coined by Gandhi. Ambedkar served on the Defence Advisory Committee and the Viceroy’s Executive Council as minister for labour.

Between 1941 and 1945, he published a large number of highly controversial books and pamphlets, including Thoughts on Pakistan, in which he criticized the Muslim League’s demand for a separate Muslim state of Pakistan. With What Congress and Gandhi Have Done to the Untouchables, Ambedkar intensified his attacks on Gandhi and the Congress, charging them with hypocrisy. In his work Who Were the Shudras?, Ambedkar attempted to explain the formation of the Shudras i.e. the lowest caste in hierarchy of Hindu caste system. He also emphasised how Shudras are separate from Untouchables. Ambedkar oversaw the transformation of his political party into the All India Scheduled Castes Federation, although it performed poorly in the elections held in 1946 for the Constituent Assembly of India. In writing a sequel to Who Were the Shudras? in 1948, Ambedkar lambasted Hinduism in the The Untouchables: A Thesis on the Origins of Untouchability:

The Hindu Civilisation…. is a diabolical contrivance to suppress and enslave humanity. Its proper name would be infamy. What else can be said of a civilisation which has produced a mass of people… who are treated as an entity beyond human intercourse and whose mere touch is enough to cause pollution?

Ambedkar was also critical of Islam and its practices in South Asia. While justifying the Partition of India, he condemned the practice of child marriage in Muslim society, as well as the mistreatment of women. He said,

No words can adequately express the great and many evils of polygamy and concubinage, and especially as a source of misery to a Muslim woman. Take the caste system. Everybody infers that Islam must be free from slavery and caste.[While slavery existed], much of its support was derived from Islam and Islamic countries. While the prescriptions by the Prophet regarding the just and humane treatment of slaves contained in the Koran are praiseworthy, there is nothing whatever in Islam that lends support to the abolition of this curse. But if slavery has gone, caste among Musalmans [Muslims] has remained.

He wrote that Muslim society is “even more full of social evils than Hindu Society is” and criticized Muslims for sugarcoating their sectarian caste system with euphemisms like “brotherhood”. He also criticized the discrimination against the Arzal classes among Muslims who were regarded as “degraded”, as well as the oppression of women in Muslim society through the oppressive purdah system. He alleged that while Purdah was also practiced by Hindus, only among Muslims was it sanctioned by religion. He criticized their fanaticism regarding Islam on the grounds that their literalist interpretations of Islamic doctrine made their society very rigid and impermeable to change. He further wrote that Indian Muslims have failed to reform their society unlike Muslims in other countries like Turkey.

In a “communal malaise”, both groups [Hindus and Muslims] ignore the urgent claims of social justice.

While he was extremely critical of Muhammad Ali Jinnah and the communally divisive strategies of the Muslim League, he argued that Hindus and Muslims should segregate and the State of Pakistan be formed, as ethnic nationalism within the same country would only lead to more violence. He cited precedents in historical events such as the dissolution of the Ottoman Empire and Czechoslovakia to bolster his views regarding the Hindu-Muslim communal divide.

However, he questioned whether the need for Pakistan was sufficient and suggested that it might be possible to resolve Hindu-Muslim differences in a less drastic way. He wrote that Pakistan must “justify its existence” accordingly. Since other countries such as Canada have also had communal issues with the French and English and have lived together, it might not be impossible for Hindus and Muslims to live together.

He warned that the actual implementation of a two-state solution would be extremely problematic with massive population transfers and border disputes. This claim was prophetic, looking forward to the violent Partition of India after Independence. 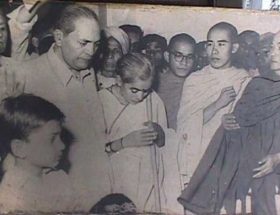