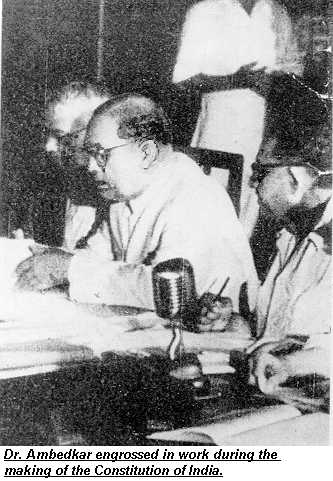 Upon India’s independence on August 15, 1947, the new Congress-led government invited Ambedkar to serve as the nation’s first law minister, which he accepted. On August 29, Ambedkar was appointed chairman of the Constitution Drafting Committee, charged by the Assembly to write free India’s new Constitution. Ambedkar won great praise from his colleagues and contemporary observers for his drafting work.

In this task Ambedkar’s study of sangha practice among early Buddhists and his extensive reading in Buddhist scriptures was to come to his aid. Sangha practice incorporated voting by ballot, rules of debate and precedence and the use of agendas, committees and proposals to conduct business. Sangha practice itself was modelled on the oligarchic system of governance followed by tribal republics of ancient India such as the Shakyas and the Lichchavis. Thus, although Ambedkar used Western models to give his Constitution shape, its spirit was Indian and, indeed, tribal.

The text prepared by Ambedkar provided constitutional guarantees and protections for a wide range of civil liberties for individual citizens, including freedom of religion, the abolition of untouchability and the outlawing of all forms of discrimination Ambedkar argued for extensive economic and social rights for women, and also won the Assembly’s support for introducing a system of reservations of jobs in the civil services, schools and colleges for members of scheduled castes and scheduled tribes, a system akin to affirmative action. India’s lawmakers hoped to eradicate the socio-economic inequalities and lack of opportunities for India’s depressed classes through this measure, which had been originally envisioned as temporary on a need basis. The Constitution was adopted on November 26, 1949 by the Constituent Assembly. Speaking after the completion of his work, Ambedkar said:

Ambedkar resigned from the cabinet in 1951 following the stalling in parliament of his draft of the Hindu Code Bill, which sought to expound gender equality in the laws of inheritance, marriage and the economy. Although supported by Prime Minister Nehru, the cabinet and many other Congress leaders, it received criticism from a large number of members of parliament. Ambedkar independently contested an election in 1952 to the lower house of parliament, the Lok Sabha but was defeated. He was appointed to the upper house of parliament, the Rajya Sabha in March 1952 and would remain a member until his death.