We, the members of Dalit Bahujan Adivasi Collective, are writing this Open Letter to the Vice Chancellor, Ambedkar University, Delhi (AUD) in order to register our protest with the manner in which AUD’s flagship event, the annual Ambedkar Memorial Lecture (AML) is held. We would like to draw your attention to certain exclusionary practices that we have observed in the organisation of the AML over the past few years, particularly with regard to the selection of speakers. Addressing such issues is especially urgent in the context that this year, the University is celebrating the 125th birth anniversary of Dr. B.R. Ambedkar.

It hardly needs restating that the upper castes (savarnas led by the Brahmins), by carefully and wilfully sustaining a caste hierarchy, have monopolised the production of knowledge within academia, both in India and abroad. Such hegemonic practices have systematically and consistently placed hurdles before Dalits, Bahujans, Adivasis and minorities from accessing spaces of knowledge production on equitable grounds. This is more than evident given the overwhelming representation of savarnas in both faculty and student positions across universities in India. Such monopolisation is accompanied by other (very often invisible) forms of institutionalised caste discrimination both within and outside the university space. This is indeed antithetical to the very idea of the university, which in principle must be a space of higher learning and critical thinking on the basis of equal opportunity for, and equity among all members of society.

As stated on its website, Ambedkar University, Delhi (AUD) was named and founded on Dr. Babasaheb Ambedkar’s vision, who “believed in education as the right weapon to cut social slavery [which] will enlighten the downtrodden masses to come up and gain social status, economic betterment and political freedom.” The University believes therefore, that its vision and mission is “to combine equity and social justice with excellence, and to pioneer an institutional culture of non-hierarchical functioning, teamwork and creativity. The University strongly believes that no knowledge becomes socially productive unless it spreads across society, transcending barriers of caste, creed and class. Only then can teaching and learning become liberating undertakings, contributing to the promotion of equality, social justice and excellence.” Here, we would like to demand that if the University claims its commitment towards Dr. Ambedkar’s vision, it then behoves upon its stakeholders to ensure the implementation of this vision both in letter and in spirit. Moreover, introspect on any departure from this commitment.

Let us revisit what seems to be the sole objective of the Ambedkar Memorial Lecture (AML), as stated by the University. It is, to invite “an eminent scholar or public personality from among the best minds across the world” [emphasis ours] to share their thoughts “in areas of knowledge and human experience such as democracy, constitutional law, equity, social justice, social transformation, social action and engaged spiritualities.” Despite what is seemingly a broad mandate, when one looks at the list of previous speakers of the AML, it is surprising to find that the University has not invited even once, a speaker belonging to Dalit, Bahujan, Adivasi, minority and other such oppressed sections of the Indian sub-continent. Let us quickly refresh our memories and take a look at the names and topics of speakers invited to deliver the previous AMLs:

While these speakers may be some of the ‘best minds’ of the country, it is more than evident that there is a clear (if not deliberate) pattern of exclusion of scholars from Dalit, Bahujan, Adivasi and minority communities. This ‘oversight’ leads us to believe that after all its ‘sincere’ efforts, the University still remains a place where caste privileges are naturalised. Or to put it differently, this exercise reaffirms the Brahmanical idea that the ‘most dominant’ knowledge producer is considered as the ‘most natural’ knowledge producer – a belief which emerges from the very idea of the caste system.

The dominant knowledge producer in a caste society invariably protects the interests of the class to which he or she belongs. In the words of Dr. Babasaheb Ambedkar:

Further, the University must also introspect as to why it is an ‘Ambedkar’ Memorial Lecture and not anything else? Is ‘Ambedkar’ in this rendition a mere inert public figure or does he exemplify a historical synonym for a political philosophy that provides an alternative to existing modes of thinking and analysing the contemporary Indian polity? If the latter is true, the AML would ideally be imagined as a platform for discourses that engage with Ambedkar’s thoughts, insights, and political actions that level a systematic critique of Brahmanism, Hinduism and the caste system, which in turn provided us with newer frameworks to understand and critique the society that we inhabit. However, we feel that the previous AMLs hardly resonate with this line of thinking and we demand a collective review of them.

All of this indicates that the invocation of ‘Ambedkar’ in the Ambedkar Memorial Lecture is merely a tokenistic gesture. This is all the more evident by the fact that hardly any of the aforementioned speakers have demonstrated in their body of work, an exceptional commitment to Ambedkar’s vision and thoughts in challenging the hegemony of Brahmins and other savarnas in all spaces of our society, especially in the domain of knowledge production.

As a tangent, it is important to point out here that AUD might arguably be the only university in the country to have boldly released a press statement condemning Dalit scholar Rohith Vemula’s institutional murder. The statement noted that “[i]t is a moment to take a pledge at AUD towards sustaining the culture of dialogue and co-creation of knowledge.” And it is precisely in keeping with the spirit of this pledge to ‘co-create knowledge’ that we feel that the tenets under which the Ambedkar Memorial Lectures are annually organised need to be rethought. In a stronger commitment to Ambedkar’s vision, the AML should be a platform for discourses emerging about and from the margins which challenge the status quo and the hegemonic structures and ideas which sustain it.

However, the University has decided to invite Prof. Romila Thapar for the 2016 Ambedkar Memorial Lecture which is also designed as the culmination point of the ongoing celebration around the 125th birth anniversary of Dr. B.R. Ambedkar. While we respect her vast body of work, our prime difference with the selection of Prof. Thapar is not because of her upper caste identity alone, but due to the fact that most of her intellectual and political positions have largely been determined by a Left liberal ethos, which in its Indian avatar has overlooked, to a great extent, the centrality of caste in social, political, economic, and cultural formations. This lacuna, which we can broadly identify even in Prof. Thapar’s work, is also a by-product of an array of privileges (including her upper caste/class location). Also significant in this context is the fact that her body of work has shown no direct commitment to Ambedkar’s radical vision on history and politics. Therefore, we believe that Prof. Thapar’s work, like those of the previous speakers, represents the same upper caste discourse which preserves the status quo and has suppressed those interpretations of Indian history and society which have emerged painstakingly from the margins over several decades. In other words, this naturalisation of privileges is in fact detrimental to the development of Dalit, Bahujan, Adivasi and minority discourses on history.

As a student collective that is motivated by Ambedkarite vision and thoughts, we would like to place the following demands to the University:

1. Immediately reconsider Prof. Romila Thapar’s selection to deliver the Ambedkar Memorial Lecture in 2016 and consider more relevant scholars. A list is attached herewith.
2. Henceforth, in the selection of speakers to deliver the AML, there should be an institutional mechanism to ensure participation of only:
a. Scholars from Dalit, Bahujan, Adivasi and minority communities.
b. Scholars from any other backgrounds who have had a longstanding commitment to Dalit, Bahujan, Adivasi and minority discourses in ways that mark them in the league of Ambedkarite scholars.
c. Scholars whose work has engaged directly with Ambedkar’s own speeches and body of writing.
3. The University should ensure that year-long public programmes dedicated to exploring Ambedkarite thoughts and practices are organised in all the coming years. This must not be limited to occasions such as the 125th birth anniversary.
4. A high-level committee should be formed immediately to ensure that Ambedkarite ideas are made an integral part of every programme’s curriculum.
5. The University should institute an Ambedkar Chair and invite scholars of repute from all over the country and abroad to channelise the University’s commitment to Ambedkar’s vision. 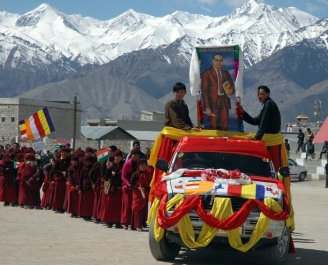