Mahatma Jyotirao Phule is a thinker who shook brahmanic India’s foundations. No philosopher is born on his own, he emerges from the conflict between various historical forces. In India, Phule and Ambedkar are the most important thinkers born after the Buddha. Ambedkar named Phule as his guru, after the Buddha. By the time Phule was born in 1820, India was firmly in the grip of the fangs of Manuwad. The villages in the areas under British rule were controlled by the landlords. Phule was born at a time when the Marathas, calling themselves Kshatriyas, dominated the countryside. Mahatma Phule was born in the Mali caste. Most of the castes now known as Backward Classes had non-sanskrit, vernacular names. We can deduce from their names that they were natives.

The resistance of the native Kshatriyas against Brahminism

The Desi Kshatriyas initially fought for acceptance in the Vedic order. That is how Shivaji’s clan began. The Brahmins, even when enjoying patronage under the Kshatriyas, tried to show the Kshatriyas as lower in the social order than them.

The conflict between the Brahmins and the Kshatriyas had been going on for centuries. The foundations of Brahminism lie in undervaluing others, deprecating them. Why should the Brahmins alone teach the Vedas? The Kshatriyas questioned: when the knowledge in the Vedas is relevant for everyone, why are some prohibited from reading them?

Phule, as the Shudra who challenged Brahminism

It was Phule, Ambedkar and Periyar who carried forward this discourse in the modern age. Whoever challenges the Brahmins is maligned. The Brahmins attempt to crush them down so that they are unable to rise again, taking on the task of defamation as a sacred duty. Have the Brahmins ever bothered to listen to any arguments against their views? They first ignore those arguments, pretending not to hear them, later they attack them in various forms, and finally when they find themselves unable to make any dent in those arguments, they attempt to steal their essence and merge it in their own. Mahatma Phule was one challenger who did not bow down to any of those Brahminical stratagems. Mahatma Phule was an unbeatable leader. The Shudra had until then remained slaves of Brahmins. They considered themselves a part of Hindu society. They conducted their marriages, death ceremonies under the supervision of the Brahmins.

The Bhakti saints who opposed Brahminism

Before Mahatma Phule, the Bhakti movement had struck strong roots in Maharashtra. Those who had led the Bhakti movement were all from the lower castes. Though they believed in God, they challenged Brahminical hegemony in all fields. People like Tukaram, Eknath and Ramdas were prominent among those who spoke out resonantly against caste inequalities. The Bhakti movement not only created tremors in society at large, but also brought about a cultural revolution among the lower castes. While some questioned ‘Why do we have so many gods?’ others asked ‘Why do we need idol worship?’ while yet others said ‘Everyone is equal before God’. Posing such questions and thoughts, the Bhakti poets stoked a new consciousness among the lower castes. Not only did they question the caste order but they also instilled those thoughts in the brilliant literature and poetry they brought forth. The songs they composed, sung to the accompaniment of various folk instruments, were especially useful in making their ideas reach the masses. The people sung their compositions during work and leisure. The Bhakti poets wrote chiefly in their native languages and dialects and that was the main reason why they gained such popularity. Ramdas’ ‘Dasabodha’ was very popular, it enshrined many eternal truths.

Guru Nanak and Kabir who emerged from Islam offered a lot of profound wisdom to society, and preached religious harmony. Their contributions cleansed society of the hold of Ugra Raudra Rasa (the Rasa of anger) infused by Saivite and Vaishnavaite streams of thought and heralded the age of reason and thinking. Religious extremism of all kinds provokes the basest instincts among men. All through the period when reason failed in India due to political violence and intolerance fuelled by the spread of religious extremism, darkness reigned over the land. It is not surprising that the reign of darkness forms the most substantial part of Indian history. The Bhakti poets, who brought in some welcome rays of moonlight into this long age of darkness, were influenced by Buddhist thought. They were also influenced by Charvakian skepticism. However hard Hinduism may have tried to suppress Buddhist thought, the latter had left a large imprint on the minds of Indians. That’s why Hinduism had to keep modifying its principles time and again.

A long history of intense philosophical struggle precedes the Buddha. If it wasn’t for the influence of Sankhya, the Buddha’s quest would not have been so intense and profound. He could not grow into a thinker until he left his throne and kingdom. The purpose of philosophy is to stir or change an inert society. When does society become inert? This inertia grows and rigidifies when some beliefs rule over people’s minds for thousands of years. If society is to be released from rigidity one needs to identify the point where the progress of thought is being hindered. The Buddha made crucial efforts in this direction. He recognized that society had become enthralled to Brahminism. He realized that the Kshatriya had become a slave to Brahminical thought. The Buddha not only challenged this domination but also showed an alternative path to organize society. This is when the Buddha became the Bodhisatva. The reason why the Buddha exercised such strong influence over Phule and Ambedkar was because of his spirit of challenging and fighting Brahminical ideas and thought.

The events that made Mahatma Phule a rationalist

Mahatma Phule and Ambedkar grew in this path (of challenging Brahminism). Philosophical thought took a lot of turns after the Buddha. The Brahmanvadis tried to appropriate Buddhism even while they condemned it. The meat eating Vaidiks took on a new avatar of vegetarians after the emergence of Buddhism. They branded the killing of animals as a crime against society. You should not kill an ant, you should not kill a snake because they are all gods, they said. But they expelled fellow men as untouchables. It was Mahatma Phule and Ambedkar who identified the violence in the social order which divided men. The Brahmins created the Varna order which killed the humane element in relations that bind one man with another. Caste emerged from this Varna order. Phule asserted that caste tramples upon human rights. It is this line of reasoning that moulded him as a thinker. The influence of the Buddhist and Bhakti movements had an important role in making Mahatma Phule a rationalist. It is experience that stimulates every thinker’s journey of enquiry; it is this experience that starts the process of rethinking, a revaluation of older ways of thinking. Phule faced humiliation at a Brahmin’s wedding, after being invited to it. That is when he started his rethinking. Many times, it is insults to self-respect that trigger rethinking. Mahatma Phule did not look back after he started rethinking.

How did he get the name Jotirao Phule

Even though his name Jotirao is from Marathi, the noun ‘Jyoti’ is derived from Sanskrit. Jyoti means ‘light’, and the suffix ‘Rao’ was added to this. He was later called ‘Jotiba’. Here, ‘ba’ is an honorific bestowed on him by the people as a mark of love. Govindrao was Jotiba’s father. It was Dhananjay Keer who called him Mahatma Jotiba Phule. Rosalind O’Hanlon referred to him as Pule, but Keer called him Phule. G.P. Deshpande, writing about Jotirao Phule’s family, furnishes all those details.

The uncertainty about Jotirao Phule’s date of birth

Jotirao’s family lived during the reign of the Peshwas. Born in a family of coolies or manual workers, Phule had seen the worst of slavery in society. The Backward Classes of today were Shudras of those days. They had been rulers too. The Shudras were oppressed by the top three Varnas. As they served the Brahmins providing various forms of labour and services, the Brahmins ensured that they never got access to education and opportunities to escape from their servitude. If anyone from the Shudra castes attempted to get an education the Brahmins considered it a jolt to the very foundations of society. Then they would try to teach the Shudras the doctrine of caste dharma. They created two distinct classes among the Shudras. They separated the peasant castes like the Kammas, Reddies and Velamas from other Shudras in all the regions. The weavers, toddy tappers, potters, blacksmiths, barbers and others were grouped into another class of Shudras.

The Brahmins feared that if all those Shudras started making claims on education, they would lose their own status. Hence they not only propagated the idea the idea that those who were literate were naturally superior, but they also forbade the dissemination of education among the others. It was due to these circumstances that the illiterate parents of Jotiba Phule could never record his date of birth. It was not just Phule, but many of the Dalit Bahujans of that age were never aware about their dates of birth. Even those among the upper castes faced a lot of problems in recording accurate dates of birth because they mostly followed traditional Indian calendars which did not match the accuracy of western calendars. But historians have concluded that February 20, 1828, is Mahatma Phule’s date of birth. Dhananjay Keer had written that 1827 was the year of birth. Acharya Jawadekar, in ‘History of Modern India’ (‘Adhunik Bharat’) mentions 1828. Thanks to Dhananjay Keer’s biography of Mahatma Phule that Indians now have access to a lot of information about him.

Mahatma Jotirao Phule was someone who, even though born in a family that could not even record his date of birth, changed the course of India’s history. Using the same knowledge of letters that his family was excluded from for ages, Jotiba Phule unveiled India’s history in a new light. He proved that education could challenge traditional hierarchies. He rewrote the puranas and critiqued the Vedas. He preached that the varna philosophy entrenched in Indian culture was wrong. He laid the path to a social revolution among the shudras and ati-shudras. Studying Phule’s life comprehensively in all its phases could make us social revolutionaries too. Our dormant social consciousness would be aroused and propel us towards a movement to build an alternative to Brahminwad. Mahatma Phule’s life history prepares us to work for the birth of a new society.

Today, there is a need for the Dalit bahujans to practice principles of Phule’s thought. It is important that they enter into modern fields of production with more vigour. Instead of depending on others, they should learn to build institutions on their own, improve their k knowledge and skills, and lay the foundation for a cultural renaissance. The backward classes, especially, can stay from ignorance and superstition through the acquisition of education and a scientific temperament and improve their lives. The Dalit bahujans are unable to escape from the oppression of the upper castes because they continue to support brahminwad strongly. They should follow the path of Mahatma Phule and Ambedkar and make education the foundation for development of their lives. They should acquire proficiency in not just their mother tongue but also in English. They should also enter the field of information technology in a big way. Mahatma Phule and Ambedkar could challenge Brahminwad through their knowledge of English. Studying their writings will help young Dalit bahujans gain self confidence. Mahatma Phule grew into a prophet because he kept away from idle pursuits and vices. He started the first school for Dalit girls and helped his wife become a teacher. Dalit bahujans have shown more interest in modern consumerism than production related activities. 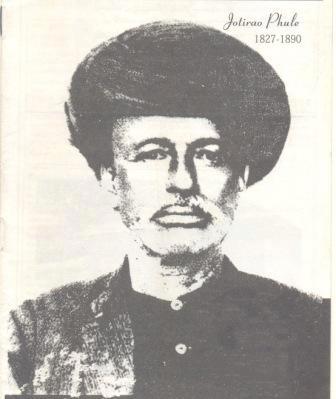