“Ambedkar’s Buddhism was a Buddhism of a minority trying to liberate the entire nation. Ambedkar opposed separatism but always kept in mind the unique nature of the oppression of the Dalits.” 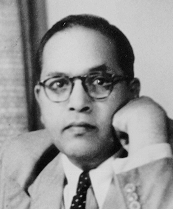 (April 17, Hong Kong, Sri Lanka Guardian) Baba Saheb Ambedkar’s memory was celebrated by large numbers of admirers and followers in India and outside once again this week. Perhaps no other modern contemporary leader of India is as much remembered by such large numbers of (mostly much oppressed) people throughout India as Ambedkar is. One-time untouchables, who now called themselves Dalits, a name that was given to them by B.R. Ambedkar, remember him as an inspiration in their own struggles to regain their dignity. Perhaps no people have been put into such a degraded position in society anywhere as the untouchables of India. The millions of people who belong to these groups have fought a battle to re-emerge as people with dignity, and to that revival Ambedkar has contributed greatly.

Ambedkar’s political thought is still very relevant to not only to the politics of India but also to politics in South Asia in general. South Asian countries are today facing deep crises, unable to develop political and social institutions to guarantee stability to their societies primarily because of centuries of oppressive and social political systems that were their heritage due to the caste system. The caste system essentially was a system of domination by a small group, called Brahmins, who developed most sophisticated forms of cunning into the social control systems of their time in a way that even for centuries they could maintain their dominance. The damage that was done in the process of repression that accompanied the creation and the maintenance of the caste system have become the obstacles to the development of the intelligence the creativity and the capacity of all the people to deal with contemporary problems. Their past holds them in their bondage. The bonds are so deeply engrained into the very nervous systems that generation after generation people are reproduced with mentalities that prevent them from realizing the capacity for freedom and capacity for deeper social communion in each other in their social context. Deep divisiveness inbuilt into the South Asian culture was created by these centuries of subtle of social control. Methods of control were formulated as rules of religion and rituals to which the individual life was so deeply tied up.

The idea of the individual freedom is so alien to this cultural heritage. The intricate mechanism that entraps people emotionally and psychologically by various kinds of mythical beliefs got so engrained in the minds of all due to this past.

“Ambedkar’s political thought is still very relevant to not only to the politics of India but also to politics in South Asia in general. South Asian countries are today facing deep crises, unable to develop political and social institutions to guarantee stability to their societies primarily because of centuries of oppressive and social political systems that were their heritage due to the caste system. “
……………………………

A few great leaders in India understood the depth of the internal bondage of the Indian mind created by this history. Some saw it purely as philosophical problem, like for example Sri Aurobindo. Sri Aurobindo devoted the later part of his life trying to influence the younger generation to break away from the mindset that has entered into their society, retarding all, from one generation to another. He said that the great creativity that India once was had been devastatingly destroyed at sometime point of time.

It was B.R. Ambedkar that identified the cause of the retardation of the Indian creativity, which is also the source of the retardation of the mindsets of people of other South Asian countries. He saw that purely by way of mental exercises this bondage cannot be broken. What needed to be broken were the social the social linkages which had tied up the minds of the people over centuries. To this he gave and for the understanding of this processes he devoted his time. And his way of understanding was not by reading into the text of the past but into the lives of the ordinary folk of India spread in that vast country.

In the poverty of India was the evidence that was necessary to look into in order to discover the methods by which people lives are destroyed by this terrible heritage.

Jawaharlal Nehru in the Discovery of India tries to talk about the glories of India in the past. Ambedkar on the other hand tries to demonstrate how the glory was lost and how the bondage of the Indian minds and the Indian spirit and as a result the Indian way of life was come to what it is today. It is this discovery that has the capacity and the liberating effect that not only the masses but the entire country is in need of in order to face the challenges of the modern times.

Ambedkar was well-versed on history and the political theories which have been produced in the process of struggles for democracy. He was also deeply aware of the history of minority problems in the world. He understood that if a minority problem is not properly resolved entire civilizations can be destroyed in conflicts which not only destroy the minorities but entirety of society.

Ambedkar needs to be studied much more by the younger generations who are in search of solutions to the kinds of problems that they very often which they feel that there are no solution to. The easy solutions many have sought have not worked. There is a depth that needs to be explored in order to be able to explore all the possibilities of getting over these severe problems. In the work of Ambedkar there are great insights that are yet to be explored and in that exploration the real glories of the past of the sub-continent could reemerge. Pseudo respect for Buddhism today was challenged by Ambedkar who himself became a Buddhist by trying to rediscover the actual history of Buddhism in India. The destruction of Buddhism in India was a result of the caste struggles in India and in that struggle the certainties that the Brahmins had developed to get victory and to win back their dominance were also constantly exposed by Ambedkar.

Without doubt, Baba Saheb Ambedkar is the greatest political leader in modern South Asian history, with regard to his understanding of the linkage between social controls exercised by religion and its influence in the contemporary history. While Mahatma Ghandi saw the meaning of freedom in terms of getting rid of the colonial power and passing the power to local elites, Ambedkar saw freedom of Indians from the point of view of getting rid of cultural inhabited bondage of created by the caste system. He saw centuries old practices in which social control of the masses has been done mainly by the use of language, rituals and ‘ethical codes’ reinforcing the caste domination over the masses.

Ambedkar also saw moments of liberation in Indian history. That was the way he saw Buddhism. He called Buddha his guru. He said that he didn’t learn principles of democracy from Western philosophers but from his guru, Gautama Buddha.

“Positively, my social philosophy may be said to be enshrined in three words: liberty, equality and fraternity. Let no one, however, say that I have borrowed my philosophy from the French Revolution. I have not. My philosophy has roots in religion and not in political science. I have derived them from the teachings of my master, the Buddha. In his philosophy, liberty and equality had a place: but he added that unlimited liberty destroyed equality, and absolute equality leaves no room for liberty. In his philosophy, law had a place only as a safeguard against the breaches of liberty and equality; but he did not believe that law could be a guarantee for breaches of liberty or equality. He gave the highest place to fraternity as the only real safeguard against the denial of liberty or equality or fraternity which was another name for brotherhood or humanity, which was again another name for religion.

“Law is secular, which anybody may break while fraternity or religion is sacred which everybody must respect. My philosophy has a mission. I have to do the work of conversion: for, I have to make the followers of Triguna theory to give it up and accept mine. Indians today are governed by two different ideologies. Their political ideal set out in the preamble to the Constitution affirms a life of liberty, equality and fraternity. Their social ideal embodied in their religion, denies them.” Dr. B.R.Ambedkar( From All-India Radio broadcast of a speech on Oct. 3, 1954)

In this famous radio broadcast, he summarized the fundamentals of his belief in democracy as having its roots in the teaching of Buddha. He also devoted many years of his life studying Buddhism and wrote large volumes on the teachings of the Buddha. In 1936, in a speech which now remains as a political classic, entitled ‘Annihilation of Caste’, he attributed the roots of caste to be based on the ideals of religion created by Brahminism. He declared that though he himself was born to that tradition, he will not die within it. Fulfilling this promise, 20 years later he converted himself publically to Buddhism, with over 500,000 followers in a public ceremony held in Nagaland, India.

Ambedkar’s Buddhism was a Buddhism of a minority trying to liberate the entire nation. Ambedkar opposed separatism but always kept in mind the unique nature of the oppression of the Dalits. However, he understood that unless the entire nation rejects the traditions which keep its masses under oppressive social control, the minority cannot find liberation. He was fully aware of his capacity to create political chaos if he wished to do so. He consciously avoided that path, despite of the difficulties involved. He was the only Indian leader who openly opposed Mahatma Ghandi on his limited approach to deal with the problem of Dalits. However, he shared the common burden of Indian liberation from the British and even became the law minister in Jawaharlal Nehru’s cabinet. In fact, he was the chief draftsman of the committee which drafted the Indian constitution. He understood that the minority cannot win its right by destroying democracy. He also understood that by suppressing the minorities’ struggle, the majority are ruining themselves also. How true, even in the modern context of South Asian countries.

To the struggle for enlightenment in South Asia, Ambedkar has made a lasting contribution. And this contribution needs to be understood to further the process of trying to deal with the contemporary problems within all South Asian nations.