“My friends’ mothers scolded in foul language and provoked them to set ablaze the cheri people’s houses; my school mates burnt my house. The prize certificate which I got for the oratory competition was burnt. I witnessed the whole mess from that backyard. Now, how can I go to the same school”
–Vishali (name changed), ninth standard student, Anna Nagar, a survivor.

On November 7, 2012, the Dalit colonies of Natham, Anna Nagar and Kondampatti in Dharmapuri Panchayat were looted and burnt by a mob of casteist Vanniyars (an OBC caste). More than 250 houses were destroyed badly and and made unfit for living. The newspapers have reported this incident as a caste conflict with the burning of two or three huts. This is entirely absurd. This is not a caste conflict. But it is a planned attack of the dominant caste. A mob of 1000 Vanniyar casteists entered the villages with heavy weapons and petrol bombs when there were none to challenge them. They chased away the innocent women and children and looted and burnt their houses.

Reason for the arson

They have put the blame on an inter-caste marriage. The love marriage between Divya, a girl from Vanniyar caste and Ilavarasan, a Dalit youth a month ago triggered the worst assault on Dalits. The dominant Vanniyar caste sought to separate the couple. The Vanniyar organizations also supported this.

The Vanniyar caste people ordered the married couple to split. As it didn’t happen, they claimed that Divya’s father committed suicide on November 7 and ransacked the Dalit hamlets. The love marriage happened 40 days ago. Mr. Nagaraj, the father of that girl was a supporter of Dalits. He pleaded that only his daughter did the mistake and don’t do anything against the boy’s family. The day when his wife went to convince and bring back their daughter, they claimed that the father committed suicide. The violence was triggered when the dominant caste people executed a road blockade with the dead body of Nagaraj.

Ilavarasan’s Natham colony was the first one to be attacked. Ilavarasan’s place is on the way from Divya’s place i.e. Vanniyar’s area called Chellangkottai. Nagaraj’s corpse was carried to Dharmapuri Thirupathur main road through this road only. When they were passing Ilavarsan’s place, they ransacked his house and set fire to it. All the household items were ransacked. The food items and clothes were thrown outside and burnt by pouring petrol over it. The neighbors thought that the Vanniyars were doing this in anger against the groom’s family. So they didn’t undertake any preventive measures. This happened by 4.30 pm.

Only 50 people were in the road blockade with the corpse. Simultaneously, in the north of Natham colony, Anna Nagar, Kondampatti, a big tamarind tree was cut down by a tree cutting machine. In the south, a tree was chopped down to block the road in S. Kottavoor. The movement of vehicles was blocked on both sides.

Meanwhile, Vanniyars from the surrounding villages started gathering. During the road blockade, a mob of 1000 Vanniyars started entering and attacking the houses in Natham colony using petrol bombs, hammers and crowbars. The children were returning from the schools. More than 60 women were harvesting peanuts in the nearby field. The first house had been attacked by using big stones to break the front doors of the house. The cupboard inside was the first target. It was broken and the clothes were thrown out. By breaking the locker, they took out the jewels. If there was money, they took that also. Important documents, children’s books, academic certificates, ration cards were all gathered on clothes or cots and petrol was poured on them. Then they made holes in tightly closed plastic bottles filled with petrol and they poured petrol on everything, stepped outside and set fire to the petrol bombs and threw them on the houses. Therefore the whole house with all the belongings was gutted with fire.

They followed the same mode of setting fire in all the houses. According to Setu (60), “This type of attack had never happened earlier. This is the first time. When they fire to that house, I was hiding with my kids under the cot in my house. The house owner Jayaraman tried to put off the fire. But he had to run away because of the fearsome mob. Even the backward caste friends of Jayaraman only encouraged the gutting of his house. Jayaraman’s son Kaliappan had been working hard in his old-paper shop in Bangalore. The amount of Rs. 2 lakhs and 22 sovereign of gold jewels in the locker were looted. Similarly, all the houses were ransacked.
The mob entered POTA Palanisamy’s house and looted. They also burnt his bike. They looted 5 sovereign gold jewels. All the household items were burnt to ashes.

An old man, Ammasi (60) started shouting when the house he was sleeping in was set on fire by the mob. Then they took him outside. The children escaped from the houses to the nearby fields. Some of them even escaped to Maravadi and other places to hide. The children were shocked when they witnessed the looting and burning of their houses. They were weeping seeing the burning of their school books. The bottle bombs exploded and got scattered. The mob also consists of women. They beat and chased a kid. The school students of Vanniyar caste were also in the group. They set fire to the houses of their own schoolmates. After the mob departed, the women who were hiding came out and tried to put off the fire. Seeing that, the mob came back and destroyed even the water tanks.

After burgling and burning all the houses in Natham Colony, they moved to Anna Nagar. They carried out the same atrocities in Anna Nagar also. Joseph’s house was totally destroyed there, the family has nothing now, other than the clothes they were wearing. The big heavy iron gate was dislodged and thrown on the road. After that they looted Kondampatti. Gold jewels from each and every house has been looted, the money was robbed and no house has any clothes. The government has not estimated the true value of the lootings. 60 sovereigns of gold jewels were looted from Joseph’s house alone. If an average of 5 sovereigns of jewels from each of the 260 houses, then that would be 1300 sovereigns of gold. So the loss is approximately in many crores.

1. After 40 days of the inter caste marriage of Ilavarasan – Divya, the death of Mr. Nagaraj, father of the bride was claimed to have committed suicide.

2. Till the date of his suicide, he was telling that his daughter did a mistake. He even asked to leave it alone, he did not have the thought of suicide.

3. On that day, the mother of that girl was sent for convincing the daughter and not the father.

4. When Nagarajan told them to leave the issue, the Vanniyars said if we leave it, it will also continue in their families.

6. Why did they not send Nagarajan for reconciliation talks?

7. There is a suspicion that the Vanniyars may have murdered Nagarajan for their preplanned attack on Dalits.

8. Before bringing the body of Nagarajan to the road, thousands of Vanniyars had already assembled in that place. How did they come there beforehand?

9. Simultaneously, in the north of Natham colony, Anna Nagar, Kondampatti a big tamarind tree was cut down by a tree cutting machine. In the south, a tree was being chopped down and blocked the road in S. Kottavoor. The movement of vehicles was blocked on both sides. How can we say the blockade is an accident when they have cut down the trees at specific distances and directions disabling the traffic?

10. The three Dalit colonies where the trees were cut down were under attack.

11. The bride groom’s resident is in Natham Colony. But the Vanniyars have attacked Anna nagar and Kondampatti. What is the reason for attacking these colonies?

13. How did they collect so manyof bottles and heavy weapons within a short span of time?

14. Why did the Police force and fire rescue department reach the place after four hours of the attack? Even though the Dalits have informed the police department and others immediately.

15. We cannot accept that the police department cannot enter the place because of felling down of trees.

16. Even if they want to reach the place, they would have to come by Dharmapuri by-pass road to Natham colony. Why did they delay it?

17. Ilavarasan-Divya marriage is not the only reason for the attack. The psychology of the attack is that instead of being coolie slaves under them, the Dalits are now showing economic development and are more independent than the Vanniyars.

19. According to 9th standard students, their classmates and school mates were involved in the attack. They also hit them and fired the houses.

20. The mob which came for attack yelled at them that this is a 30 years enmity and claimed that this Diwali will be their special one.

21. The Vanniyars who indulged in the attack were once the friends of the Dalits.

1. Allegedly inflammatory speech by Kaduvetti J. Guru of Pattali Makkal Katchi, who had openly said at a meeting in Mamallapuram on April 2012 that Vanniyars should prevent inter-caste marriages involving their girls. He said publicly that if there is a love marriage between any Vanniyar girl and other caste men, the Vanniyar boys should kill them. This speech gave the accused the stimulus to carry out such an attack. So action should be taken against Kaduvetti Guru and Dr. Ramadoss under SC/ST (Prevention of Atrocities) Act.

2. In the Kongu region, the Kongu Vellala Gounder Peravai and other dominant caste organisations also had a similar stand against inter-caste marriages. It was propagated even in the schools. This should be banned and action should be taken against them.

3. The money, jewels and other looted things from Natham colony, Anna Nagar and Kondampatti should be recovered and returned to the Dalits.

4. The government should be responsible for the safety and other resources for the schooling of those children in these areas.

5. Not as compensation but Rs. 5 lakh rupees should be given by the government to the people who have suffered by the attack.

6. The people who were involved in this caste based attack should be punished legally.

7. The annihilation of caste should be propagated in schools.

8. The government should honor the people who did inter caste marriages.

9. Like HIV/AIDS and family planning campaigns, the government should carry out campaign on annihilation of caste, it should be done on television, newspapers in dominant caste regions.

10. The dalits who are victimized in these type of attacks should be counseled and special loan support should be given to those victims.

11. The government should strive for long term sustainable solutions for these kind of attacks instead of temporary solutions.

12. The government should allow the assembly of Dalits and to keep weapons for self security. 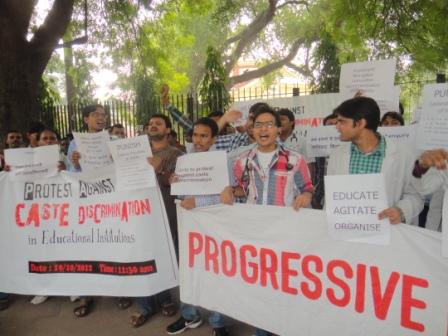