We hereby write this statement after in consultation with some of the GOI PMS students of TISS Hyderabad regarding the Protest which has been going on for the last few days and the grave situation currently presiding over there, regarding the closure of the TISS Hyderabad campus for an indefinite period of time.

We Ambedkarite Student’s Association TISS Mumbai, stand in complete solidarity with the struggle of students from the SC, ST and Other Backward Classes (OBC) backgrounds who were fighting against the unjust nature of TISS Hyderabad Administration’s fee hike of hostels. As per the various news sources and via social media handles of the Protesting students, this protest had intensified in the following days when, according to the protesting students, the Administration had not given a ‘proper response’ to the demands of the students and therefore the protests continued. In this light, on the 15th of July, 2019, the TISS Administration has also issued a notice which states that the academic activities of the TISS Hyderabad Campus will be therefore suspended SINE DIE ‘with immediate effect’. This has clearly made the situation graver which therefore is affecting the academic life and careers of many Marginalized Students.

However, when we contacted some of the GOI PMS Scholars in TISS Hyderabad, we received an alternative narrative; one which has not gone out in public both in media and social media handles as well, possibly out of the fear of being gaslighted by other Students mostly from Non GOI-PMS and Savarna Backgrounds. It was stated that on the 11th of July, there was a meeting between the management and the GOI PMS Students and that a temporary solution was drawn in form of financial aids being allocated to the GOI PMS Students by the Administration. Nevertheless, following this, the protests still continued in the further days in which the entire issue regarding the GOI PMS has been diverted completely.

According to this narrative, in spite of the GOI PMS issue already being taken care of temporarily after the initial meeting, the protests still continue thereby leading to another mode of appropriation of Dalit-Bahujan-Adivasi GOI-PMS Students’ issues and that it has further caused a great deal of chaos and confusion among the larger student community

as well. If this narrative is true, then we hereby would like to state here that we in no manner support such kind of appropriating methods taken by Non-GOI PMS and Savarna Students which thereby are creating problems for Dalit-Bahujan-Adivasi GOI-PMS Students in the long run. If such narrative seems to be true, though we stand in solidarity with the protesting students, we hereby do strongly condemn this method of appropriation of Dalit-Bahujan-Adivasi GOI-PMS Students’ Issues by any means possible.

We also came to know via Social media and news handles that some Students were engaged in Hunger Strike modes of protest, mostly from marginalized backgrounds. Once again, we would like to state here that though we do stand in complete solidarity with the concerned students, we also earnestly and sincerely appeal to them not to endorse or engage in such kind of protest methods which could cause harm to their health or even their lives. As marginalized students coming to higher educational institutions, we do represent our community in one way or the other and that the well-being of one’s health is very much essential for working towards the emancipation of one’s community as well.

Therefore, we the Ambedkarite Students’ Association (ASA), TISS Mumbai strongly demand that the TISS Hyderabad Administration revoke its draconian decision of the suspension of the academic activities SINE DIE in TISS Hyderabad and work on constructive possible alternatives for the students so that their academic year will not be affected by any means possible. We also strongly urge the Protesting Students of TISS Hyderabad to work on possible constructive alternatives so that the academic life of the larger Student community can be returned to normalcy. After all, Education is the most essential tool for marginalized students to fight back Brahminism and therefore a strong consensus must be taken by both the parties to work for the benefit of the marginalized students of TISS Hyderabad. 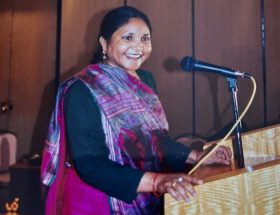