The assignment is of performing the story of Ambedkar in a folk art form, shadow puppetry.  Shadow puppet theatre is widely held in the southern districts of Tamilnadu.  Though it is prevalent in most of the South Asian countries it is habitually getting ostracized in the villages and performance opportunity is on the decline for the past fifteen years.  As most of the puppeteers have deserted the tradition of performance and turned into migrant laborers wandering in the cities, the history of puppeteers who survive in Tamilnadu is absorbing.

The puppeteers of Tamilnadu

Traditional shadow puppet performers portray themselves as a migrant community originally from Maharashtra, a state of Central India.  They verbalize a dialect of Marathi among themselves and entitle this as their mother tongue.  However, they are conversant in Tamil and their command over a range of Tamil dialects is astonishing.  They fit into a caste community called ‘mantigar’.  They have a legend to explain their migration from Maharashtra to Tamilnadu some five centuries back.  Their narrative relates their community to a Maratha ruler, Saraboji, who ruled the central part of Tamilnadu with Tanjavoor as his capital.  According to their legend they were brought here along with the warriors of King Saraboji.  We can easily identify a tone of pride whenever they narrate this legend.  It sounds like they demand a distinct political identity by keeping alive this narrative as their migration tale.  Similarly, they have one more reason for claiming uniqueness over others, however this time it is more religious in nature.  They believe they are chosen by god’s grace for this profession of puppeteers specializing in performing the ‘Story of Rama’. This legacy gives them immense pleasure and one puppeteer says, “Our body and soul have grown with the ringing sound of ‘rama’”.

Shadow puppet theatre, the only folklore form that has a South Asian currency is at its deathbed.  Since there was no traditional institutional back up for this art form in Tamilnadu (in some other South Asian societies shadow puppet theatre is solemnized and adopted by religious institutions), or any other state sponsorship to enliven it, it is slowly vanishing from the cultural canvas of Tamil society.  The debacle of the puppeteer’s life begins when they are forced to sell their bullock carts due to financial constraints.  Then there follows the light and sound system in the list of sold items.  Finally, they displace themselves to the nearby town, leaving the leather puppets to the digestive system of termites: puppets that have been prepared by their forefathers’ at least a minimum of hundred years back! This is the gist of the life of Tamil puppeteers. 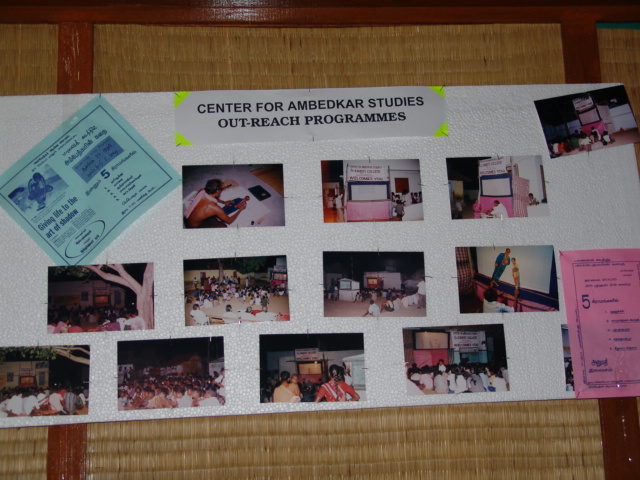 The puppeteers’ analysis of the devastating decline of shadow puppet theatre singled out the boom of electronic media as the major reason.  Specifically, the society’s craze over cinema and television.  Both the industries, puppeteers blame, systematically manipulate the narrative patterns of shadow puppets from the story line to the extant of characterization.  When people find the Rama story as television series, they unconsciously establish an intimacy with that.  The puppeteers are very stubborn in their conclusion that electronic media overtook the shadow puppet because of its sexual content.  The mass media’s formula of mixing sex and religion within their narrative seems to be the key of all these problems.  Hence the Tamil puppeteers quixotically develop a weapon against the mass media; and it is popularly called as ‘Record Dance’.

There is no equivalent Tamil term for ‘record dance’.  It is known by this anglo saxon word even in the remote villages.  It can be also considered as a local art form, basically imitating the narrative patterns of commercial Tamil films.  Like any other, Indian popular cinema and Tamil films too have an inevitable motif called film songs.  The songs are choreographed and incorporated within the story line of the feature films.  ‘Record dance’ is a mimic of this motif.  The record dance players will maladroitly costume themselves as the film actors and actresses and try to redo the same dance sequence live in front of the village audience.  Astonishing sexual gestures are the salient features of record dance.  People more or less incorporated these as a part and parcel of their popular culture.  For the past two or three decades the existence of this dance form becomes inevitable in all festivities and celebrations.  When the puppeteers have found that the folk community begun to withdraw its loyalty from traditional performances such as shadow puppet theatre, this mechanism was designed to pull back the audience, by introducing ‘record dance’ within their shadow puppet performance.

The shadow puppet performance which used to be enacted for two to three hours has now been reduced to a thirty or forty minute capsule.  The remaining two hours has been re-allotted for ‘record dance’.  Young men and women who costume themselves as tinsel characters will occupy the stage and perform the popular mimes and gestures ordained for the song sequences.  Some puppeteers will be lucky to have a young husband and wife in their troupe, and then there will not be any problem in organizing ‘record dance’.  But in a considerable number of troupes there will not be any newly married people; but young men and women who are siblings may be around.  The puppeteers never hesitate to allow a brother and a sister to perform the ‘record dance’.  The worst affected troupes will be the ones that have no such young people as their members.  These troupes naturally withdraw from the tradition of shadow puppet performance and become unskilled laborers in small towns and cities.

We strongly believe that shadow puppet theatre should be a fitting medium to disseminate the life and thoughts of Ambedkar.  Not only Ambedkar, I had a strong belief that any kind of social criticism could be well accommodated within the narrative pattern of this traditional theatrical form. The technology of shadow puppetry is hypnotic.  The inherent binary, ‘colored shadows’, is a point of attraction.  Hence, the subversion inspired by two comical characters, Uchikudumi and Uluvathalaiyan, is a unique feature of this theatrical form.  Therefore, we chose shadow puppet theatre as a suitable traditional art form to visually represent ‘Ambedkar’s Story’, the title we have given for the new shadow puppet performance. 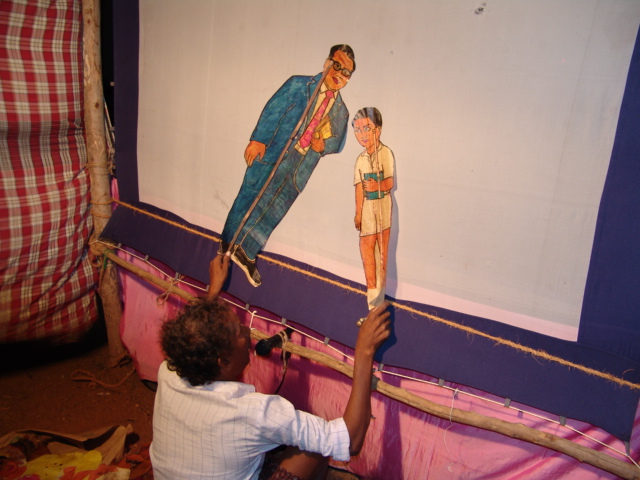 It was by accident that we got acquainted with a traditional shadow puppet performer, Lakshmana Rao, who lived in a nearby town, Kovilpatti.  Since his troupe had no youngsters he was suffering much in doing the puppetry without ‘record dance’.  We explained our project, ‘Ambedkar’s Story’, to him.  His reaction was double.  At one level he sensed a possibility of getting the assurance for regular performance; contrarily at another level he was not sure whether he could concoct the performance text of an altogether new story line.  As he was illiterate, he felt nervous about the creation of a new text.  Though we had explained in great length against the myth, ‘creativity always goes with literacy’ to him and had elaborated the importance of being an innovative traditional performer, he never regained confidence of doing that.  Finally he came up with an alternative that he would ask the assistance of another performer called Muthukumar Rao for spinning the new performance.  Muthukumar Rao was his cousin.  He began his life as a record dancer and then became a puppeteer.  Since he had sensed the devastating situation of puppetry, he trained himself as a bow-song performer (another popular, religious folk performing art) and an instrument player (he played the key board).  Most important factor is that he is a literate shadow puppet performer.

The project was designed to evolve in three phases – formulating the songs and dialogues of the performance at the first level; producing necessary leather puppets, the second phase; followed by correlating the animation of the puppets with the text.

We initiated conceiving the textual part of the performance with the repeated elaboration of the life and thoughts of Ambedkar.

Lakshmana Rao was the classic example of a traditional folk performer.  He would be around fifty.  But he always maintained that he was forty.  For that he referred the experience of visiting Dhanushkodi after the historical storm hit it.  He would be telling us he was ten at that time.  That was his simple arithmetic of calculating years.  He continuously chewed beetle leaves.  Whenever he encountered literate people face to face his reaction would be at unease.  However, as soon as the person lost his eye contact he turned his cheek.  He was simple and raw.  He was proud of whatever he knew and would be tranquil wherever he was ignorant.  He was very eager to see his photograph with a feature about his art form in news magazines.  Muthukumar Rao on the other hand was slightly twisted.  He was a folk artist with cell phone facilities.  He was almost running length and breadth of the region for various kinds of performances he had accepted.  He had the habit of negotiating the amount, whatever it might be, proposed to him.  He was vociferous and also professional.  But, the intricacies of our project were astutely grasped by the latter, but not the former.

The work had been bifurcated.  It was decided that Muthukumar would do the textual section, while Lakshmanan would prepare the puppets.  Both the processes continued for almost a month.

To be continued as The Touch of Ambedkar (part II). Read part II here. 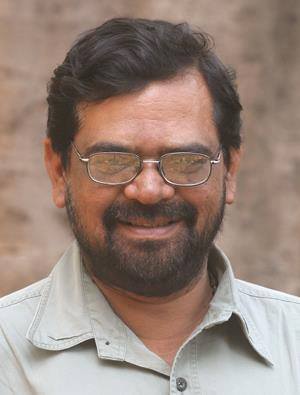