(An excerpt from the book ‘Buddhism in India: Challenging Brahmanism and Caste’)

While Nandanar has become well-known only in Tamil Nadu and has had no recorded influence on other bhakti sants, the Chamar or leatherworker, Ravidas, who lived in the 15th century, is one of the most famous of sants in north India and has influenced many others. Many of his songs survive in some form or the other. There are countless stories about him and he is widely known as one of the greatest of saguna devotees, i.e., devotees of God ‘with form’, who take Shiva or Ram or Krishna or one of the many incarnations of Vishnu as their personal deity.

Ravidas is associated with the other great north Indian sant, Kabir, in a story where a great debate between them is represented as a saguna versus nirguna (without qualities) devotion debate. He is also linked to the Rajput princess Mirabai, most famous of the women devotees, who took him as her guru. His compositions are included in the Adi Granth, the scriptures of the Sikh community (Hawley and Juergensmeier 1988: 9–23).

His many songs show both humility and devotion: ‘I am a peddlar for Ram; I traffic in his easy ecstasy. I’ve loaded myself with the wealth of Ram’s name while the world is loaded down with poison’ (ibid.: 29). They also show the aspiration to go beyond caste, though the translated poems, available from ‘authenticated’ collections, lack the bitter condemnation of Brahmanism and caste that can be found in Kabir and Tukaram.

A family that has a true follower of the Lord

is neither high caste nor low caste, lordly or poor.

The world will know it by its fragrance.

Priests or merchants, labourers or warriors,

halfbreeds, outcastes, and those who tend cremation fires –

their hearts are all the same.

He who becomes pure through love of the Lord

exalts himself and his family as well…

no one equals someone so pure and devoted –

not priests, not heroes, not parasolled kings.

As the lotus leaf floats above the water, Ravidas says,

so he flowers above the world of his birth (Adi Granth #38).

The dominant tradition traces the north Indian bhakti tradition to Ramananda, a Brahman who moved to Varanasi from the south around the 14th century and gathered together a circle of devotees, becoming the guru of many famous sants, including both Ravidas and the weaver Kabir. In contrast to the self-questioning fostered by Buddhism, Brahmanism had always insisted that it was necessary to approach god or cosmological questions with the help of a guru. It was the guru who gave a mantra, a verse or word or phrase, that the seeker would repeat as a kind of self-hypnosis; and it was the guru who taught the ‘secrets’ of the tradition. The guru, ideally, would be a Brahman—like Ramananda. Making a Brahman a guru, and imposing the guru tradition on the bhakti movement, has been an important aspect of the ‘brahmanising’ process that it underwent.

As in the case of Nandanar, the documentation of the north Indian bhakti movement was done centuries later by literate high-caste men. An early account was written by Nabhadas around 1600, the most influential commentary on which was by Priyadas in 1712. These not only make Ramanand into Ravidas’ main guru, but ‘Brahmanise’ Ravidas himself, analogous to the way that Nandanar’s devotion was made acceptable through his being purified by fire and shown as being ‘truly’ a Brahman. In the case of Ravidas, he is said to have been a Brahman in his previous life, but because he offered Ramanand some food that had been given by a merchant who had dealings with Chamars, he was reborn as a Chamar after he died. This itself indicates the degree of purity–pollution behaviour observed even by Brahman ascetics; but worse if anything is the story that as a baby Ravidas would not accept the milk of his Chamar mother, but only of a Brahman woman (Hawley and Juergensmeier 1988: 15–16)!

Radical Dalits today question the Brahmanical interpretation of Ravidas. They claim that his guru was Sardanand, and emphasize his ability to defeat Brahmans time and again in debates. The Adi-Dharma, a radical anti-Hindu sect founded in the 10th century in the Punjab, takes Ravidas as a non-Hindu, anti-caste and a founder of practically an independent religion. Indeed, such ‘vanis’ as the following are impressive, if not substantiated as ‘original’:

Ravidas says not to honour (do puja to) Brahmans, who are without merit;

honour instead the feet of Candalas who are full of merit…

Dependency is evil, the dependent are miserable—

Ravidas considers dependency the lowest of all (Shalvan Patrika, 25 June 2001).

The dominant account can be disputed on good grounds: Ravidas himself never mentions Ramanand, who seems to have lived a full century before Ravidas. The sants mentioned in Ravidas’ own poetry—those he considered his ‘family’—include the Maharashtrian tailor Namdev and the weaver Kabir (Hawley and Juergensmeier 1988: 9–23).

Ravidas is depicted as having high-caste disciples. Among these are two Rajput women, Mirabai and Queen Jhali, who is said to have met Ravidas on a trip to Banaras. According to the story, she accepted Ravidas as a guru, against the strong advice of her Brahman advisors, and when she prepared a feast to honour him, the Brahmans declined to eat from the same vessels or sit in the same row with him—but they found that a Ravidas had miraculously materialised at the side of every Brahman. When they challenged his right to be there, ‘he peeled back the skin from his chest and revealed a golden sacred thread that lay within, clear evidence of his inner brahmanhood’ (Ibid.: 14–15).

In the end, Ravidas’ bhajans reflect both a sense of poverty and caste humiliation and a desire to find a utopia without suffering, taxes or property; one that is, above all, a Begumpura or ‘Queen City’ of companionship:

The regal realm with the sorrowless name

they call it Begumpura, a place with no pain,

no taxes or cares, none owns property there,

no wrongdoing, worry, terror, or torture.

Oh my brother, I’ve come to take it as my own,

my distant home, where everything is right…

They do this or that, they walk where they wish,

they stroll through fabled palaces unchallenged.

those who walk beside me are my friends

You will find the Scribd version of the book ‘Buddhism in India: Challenging Brahmanism and Caste’ here. 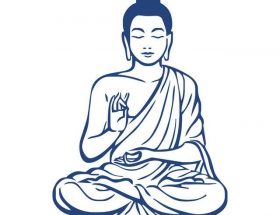