INTRODUCTION:A person, who has devoted his whole life to a particular cause, should have three special qualities in order to be successful in his work. Those qualities are absolute courage, self-sacrifice and a clear plan of action. To a large extend Periyar posses all  these three qualities.

Oppression is a known phenomenon. It existed, is existing and will continue to exist. In any society, we find that some are occupying the first steps of the ladder and some are pushed to the last and the least.This is an existential situation of our country.

In such a situation, there are two groups which are always prominent in the society—the oppressor and the oppressed. The oppressed react to the oppression or the oppressors in different ways. Some silently accept it as their destiny. They believe that such a situation has befallen them because of their past life. Others join forces with the oppressors and co-operate with them with a hidden motive of safeguarding their lives and interests. There are others who question the situation. They think in terms of challenging the oppressors.

According to sociologists and social scientists, there are three categories of people in any society at any given time. The first category of people are known as “come and go people.” They appear and disappear. They come and go without even asking the question “why” about their existing situation. They will see to it that nothing that happens in the context disturbs, affects, touches or moves them. They like to live untouched, undisturbed and unmoved lives. The second category is better than the first. They allow the situation to affect them and they look at the situation and ask the question “why.” The third category is known as the “why not” category. In this category, the people not only ask the question “why” but also “why not.” These people are generally known as “revolutionaries.” what the revolutionaries exactly do is, they look at the situation, question it, study and analyze it like the second category but after analyzing the situation, instead of just doing something, they have a vision for a new future. E. V. Ramasami Periyar, no doubt belonged to this third category of people. He looked at the situation, analyzed it and questioned it. He did not stop with questioning but had a vision for a new future, a new Tamil Nadu.

From my childhood, I had a special interest and respect for Periyar. This deepened when I listened to Dr. Jerry Rosario’s lecture on Periyar in the year 2004. In the beginning of this year, when I was in search of a topic for my dissertation, I thought of Periyar strongly. I was deeply touched by his self-respect ideology and his philosophy. Thus, I was inspired to work on the Political Philosophy of this great leader, E. V. R. Periyar.

Power is an important factor in the world. Everyone craves for power. There is a deep wound of insecurity among the people and they want to heal this wound with the medicine called power. Everybody wants to assert his or her identity and for that, the tool is power. For the sake of power, the political parties of today forgo their ideologies and join hands with other parties, which have no ideologies of their own. These people have no vision for the country. Their political philosophy is, “Capture power by any means— it is only the tool of self-assertion.” On the other hand, the political philosophy of Periyar is human respectability with an emphasis on economic and social equality, which must be primarily based on rational thinking. Periyar was never interested or cared for seats of power. However, he was in a continuous fight against certain oppressive ideas accepted in society. The re-presentation of his political philosophy is the Self-Respect Movement, which later came to be known as “Dravida Kazhagam.”

All through his life, Periyar fought against Brahmin domination. There were two events, which brought him onto this path. At the age of 25, he went over to Varanasi. He always pictured Varanasi as a holy place, where anybody could go and stay. However, when he went there, he saw that only the Brahmins were taken cared for while non- Brahmins were not allowed to stay in the inn. Being a non-Brahmin E. V. R Periyar was not given any food, even though at that time the temple was offering food for people coming from all over the world. Because of his hunger, he had to fill his stomach from the leftovers. This bitter experience seeded in him a great aversion towards the Hindu  religion. The other event that hurt him more than the previous was that which happenedin Vaikom in Kerala. At Vaikom, the low caste people were not even allowed to walk or pass through the streets of the Brahmins. These two experiences resulted in a radical change in the thought pattern of Periyar. In this dissertation, I make an attempt to understand Periyar, his philosophy and his values. In the introductory chapter, I deal with the early life of Periyar, the South Indian situation during his time and the socio-political role of young E. V. R. Periyar.

The second chapter deals with Periyar’s powerful philosophy—the Self-Respect. Movement. In this chapter, I have dealt with its origin, philosophy, meaning, politics, gains, etc. An attempt is also made to show the birth and present situation of Dravida Kazhagam.

In the third chapter, I have elaborated Periyar’s views on women’s rights.

The fourth chapter portrays Periyar’s views on religion. The final chapter deals with the present political situation of India, particularly in Tamil Nadu. I have also made an effort to analyze the question, whether Periyar is a failure or an ideal for the present day. 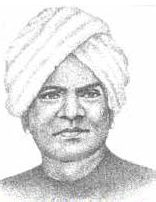