50-year-old Dalit activist, who was burnt while he was asleep, died on May 22

A tent has been set up for the past three weeks and policemen take turn to stand vigil outside the Bahyababa temple, a spot that holds a “crucial link” to the killing of 50-year-old Dalit activist Sanjay Khobragade in Kawalewada village of Gondia. He was burnt while he was asleep in his courtyard in a Dalit toli outside the village limit on the intervening night of May 16-17.He subsequently died on May 22.

A staunch follower of Dr Babasaheb Ambedkar, Khobragade was fighting for nearly three years with the village politicos, all belonging to the dominant Powar caste, to get a patch of land from the Bahyababa temple trust to build a Buddha Vihar.

With three temples, one of Bahyababa saint, a Hanuman Mandir and one of Santoshi Mata, which have been built on the government land, Dalits, a minority with just 40 houses as against 1,500 houses belonging to dominant Powar community, have been demanding that the panchayat samiti make land available to them too.

Six accused – Rushipal Tembhare (45), his wife and village sarpanch Madhuri Tembhare (40), Bhaulal Harinkhede (45), Punaji Thakre (58), Hemant Thakre (30) and Shriprakash Rahangdale (50), who is a doctor, deputy sarpanch and president of the Bahyababa temple trust, were arrested soon after the incident. They were, however, released on bail following the arrest of Khobragade’s wife Devakabai (48) and her alleged ‘paramour’ Raju Gadpayle (42). The six accused are known for their strong political connections.

The trust members, after dodging demands of village Dalits for years, had finally relented to allow a Buddha Vihar to be built next to the trust. The Tembhare couple had asked Khobragade to come after May 16, after the election results.

On the intervening night on May 16-17, however, he was doused with kerosene by “unknown persons” and set ablaze. In five days since the incident that he battled for life, Khobaragade gave three separate statements to the village tehsildar and the police, each time naming the six. As per law and since his death, the statements gain importance and law demands it should be treated as his “dying declarations”.

But the police made a complete U-turn in its investigations and rejected the dying declaration, claiming that Khobragade had only expressed ‘suspicion’ and was not sure of their identities. While the police had initially arrested six persons, Khobragade’s neighbour Gadpayale, a Dalit rickshaw-puller, was arrested on May 19. He allegedly confessed to his crime of hatching a conspiracy with Devakabai.

“They had an illicit relationship and the deceased had seen them in a compromising position that night (May 16). So, both decided to get him off their way,” said public prosecutor Veena Bajpai.

Both Gadapayle and Devakabai, during their court production, informed that they were tortured and made to confess to the crime they had not committed.

The police is reluctant in taking the past instances into consideration. “In 2012, a few days after Ambedkar Jayanti, my father’s shop, which is just outside our house, was burnt. It was a day after he (Khobragade) got involved in a skirmish with the Tembhare family over the Buddha Vihar. Also, in the past three years, my father has filed over six complaints with the police against the accused for denying us the space to build a Vihar,” said Pradeep Khobragade (30), the deceased’s son, who is fighting a legal battle. Pradeep, since the incident, has stayed away from the village and his cycle-repair shop has remained shut. The police while has gathered over a dozen statements to establish its case, statements of Khobragade family has not been recorded yet.

The initial motive of caste-based killing has now been changed into alleged illicit relationship between Devakabai and her alleged paramour. Dalit activists and villagers from the Dalit basti alleged that police is trying to save the real accused and have falsely implicated Devakabai. “The police tried similar tactics post Khairlanji killing too. The police had accused the deceased women of Khairlanji of having illicit relationship,” said lawyer Shailendra Gadpayle, who is handling Khobragade’s case.

Khobragade, in his statement, claimed that he had heard some voices before he was set ablaze and he distinctly recalled it was of the accused. But the investigating officer told the court that “he was drunk and not in a stable state”.

The sub-divisional police officer of Tirora Dilip Girhe informed the court on May 26 that Devakabai and Gadpayle had known each other since childhood and had a love affair for the last 30 years. “If one goes by the police’s claim, Gadpayle must have been 11-year-old then,” said Pradeep.

Villagers, too, vouch for the Khobragade family. “Like Sanjay, his wife too was actively agitating to get us a Vihar in the vllage. She does not deserve such treatment,” said Sangeeta Borkar, a Dalit villager.

Last week, the police allowed the six persons to be let out on a conditional bail of Rs 15,000 each, unopposed. Their lawyers are now appealing to have the bail conditions of not entering the village limits relaxed. The police, too, plans to file an application to discharge the six accused from the case.

Initially several sections of Scheduled Castes and Scheduled Tribes (Prevention of Atrocity) Act were applied against six. But, with Devakabai’s arrest, police plans to drop those charges. “That will make the family ineligible for compensation,” said lawyer Gadpayle.

While opposing Devakabai’s bail, the prosecution had told the court that they feared ‘communal tension’ in the village. “My mother has lost everything, her husband, her dignity, and now the police is making her out to be an evil person. She is poor but not poor. She will fight till the end and we will all fight for her,” said Pradeep. 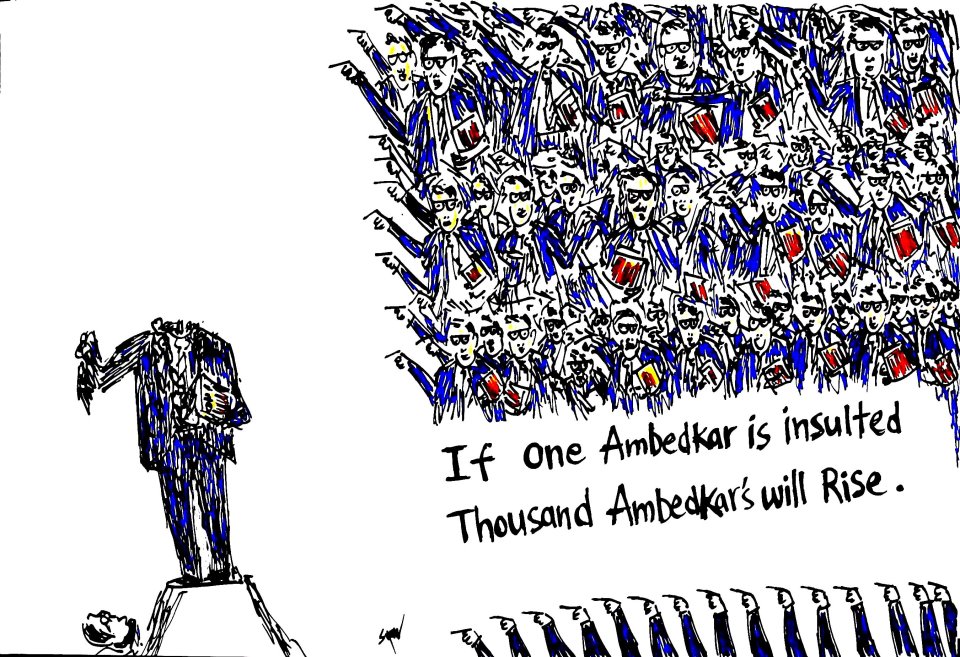