Field notes from my micro-context1 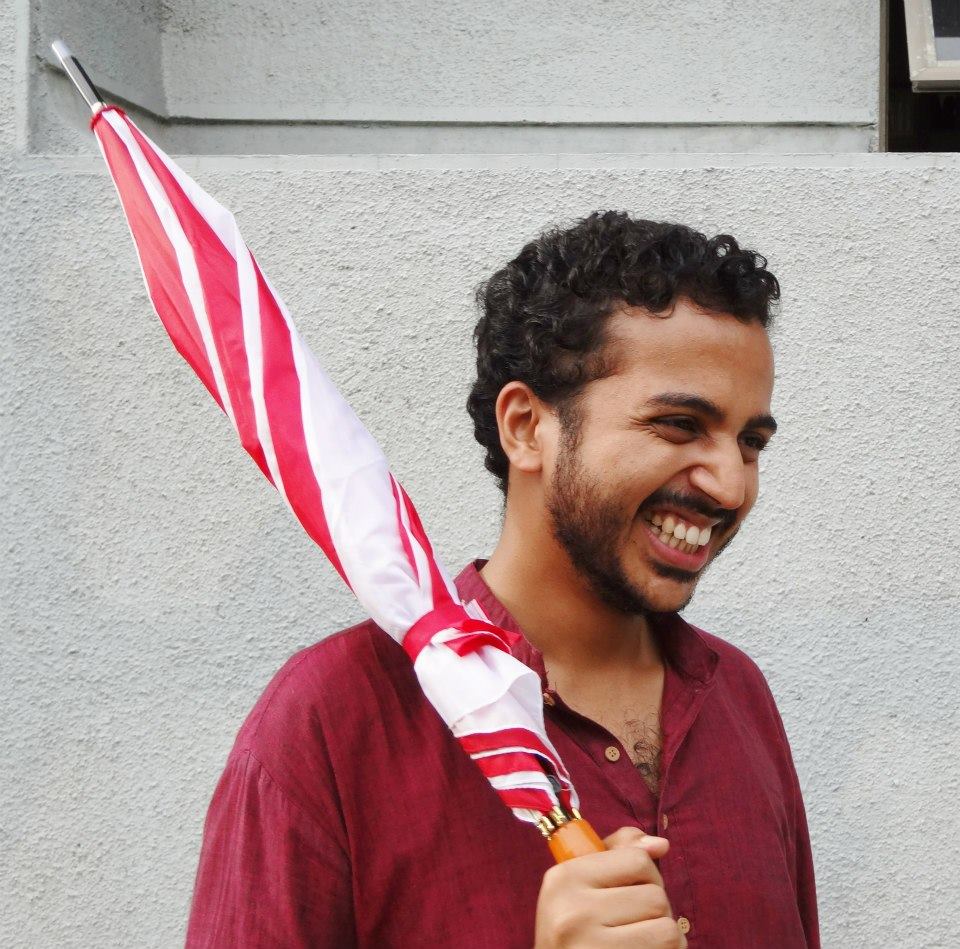 As a child, I would always wonder why my house did not look as ‘clean’ as my Nair neighbour’s. Similarly, I always wondered why none of us Christians would look as ‘authentic’ as our Nair friends when we attended Malayalee Samajam Onam programmes. Jokes/comments such as ‘Christians2 do not take bath regularly’, ‘they do not know many Onam recipes’, ‘these women do not get the perfect triangle when they wrap a veshti around their waist’ – so on and so forth were consistently circulated (and are still circulated) in diaspora circles. So even if someone enthusiastically participates in Onam, perfects the art of wearing veshti and mundu, prepares every possible ‘pure’ vegetarian Onam recipe, claiming authenticity is still a different ball game. I also realized that we were not the only people who were subjected to such ‘agni-pariksha’ to prove our authenticity. There were others too. Dalits, Adivasis, Muslims and Ezhavas were also subjected to such humour killings3.

However, I still celebrated Onam. For me, and I bet, for many others, Malayalee identity was always interwoven with a grandiose celebration of Onam. What constitutes such a celebration in a spatial context outside Kerala? It is a replication of every possible ‘spectacle’ which is associated with Onam. This includes, a huge pookalam (the size, shape and width of the floral decoration really matters!), a swing in your huge courtyard, a huge hall where people can sit and feast on Onam delicacies (censored in their content and aesthetics!), a huge tharavadu courtyard where the ultra-feminine caste-womenfolk can perform thiruvathira, so on and so forth. This is combined with Pulikali where bodies of non-Nair Shudra men get plastered with bright yellow and orange shades. They are personified but agency less lions that are hunted down by the King and his men. Each of this combined with cinematic dance, mimicry shows and light music gets replicated on the Malayalee Samajam stage. The stage looks very evidently like a Nair courtyard! The performers come from all the sections. We perform Brahmanical heteronormative patriarchy. 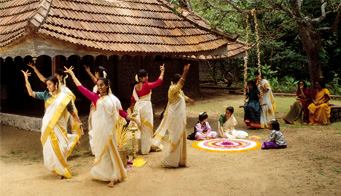 The picture that says it all: depicts a ‘tharavadu’, traditional Nair joint family home, with women in the ‘Kerala saree’ performing the ‘thiruvathira’; also shows girls arranging the ‘pookalam’, festive floral design, in the courtyard and a swing!

Now, going back to my question, what constitutes Onam in a spatial context outside Kerala? I think I should rephrase my answer. It constitutes the replication of every possible ‘Savarna spectacle’ which is associated with Onam. At this juncture, I would like to bring a few insights from Ajith Kumar’s article on Onam which appeared in Uttarakalam. He clearly points out the fact that Dalits have over the years evolved their own practices of celebrating Onam. He mentions that the Gandhian and Left anti-Onam discourse attacks consumerism and upholds moralistic austerity. It also laments the bitter death of the good old days. 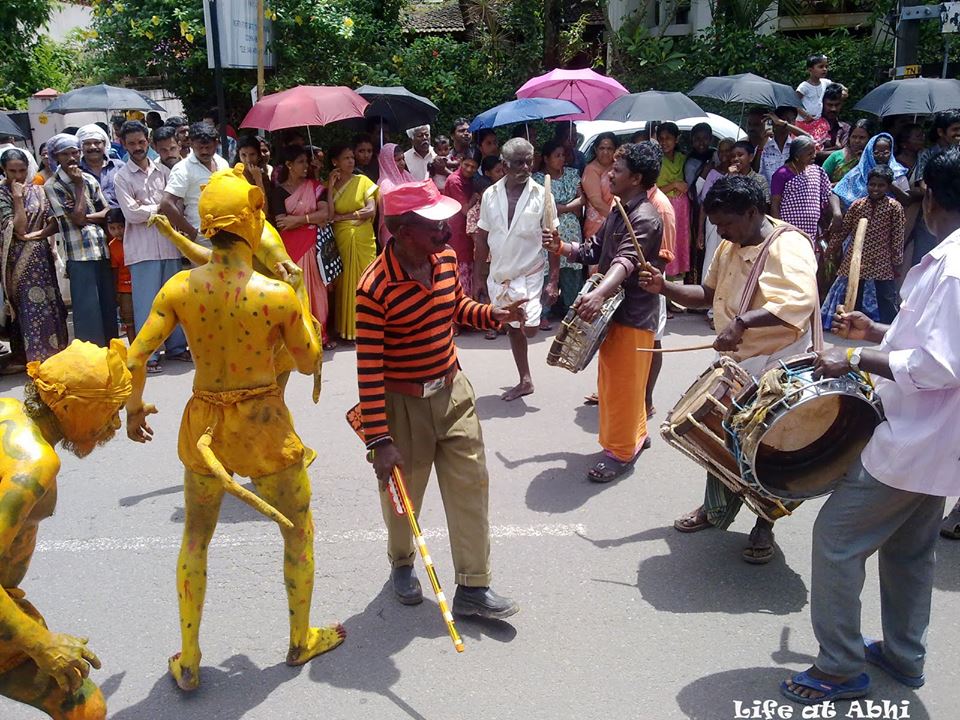 I completely agree with him and I understand the need to stay away from such appropriations. These appropriators are extremely uncritical about their own sense of privilege and power. But what seems to be also true is that the architecture, or rather the protocol of Onam in my micro-context, has remained the same. Evolved practices are accommodative in nature and not radical. They haven’t changed the protocol. The dominant formula has worked so well that for several decades, in spite of all the protests by Dalits and Adivasis, and evolved forms of practices of Onam, Keralites cutting across identities, have actively participated in declaring their own subordination.

This ‘Malayalee’ project has been so powerful that it has consumed every iota of their mental maps. This project claims its strength in imagining Kerala as a uniform, consensual geography. By imagining this unitary geography the state and non-state players of the secularism project have prepared a deadly, but extremely captivating cocktail of real Brahmanism and mythical Secularism. Conservation of this Malayalee nationalism soaked in Savarna sensibilities is a very important obsession of the diaspora. To elaborate on this I’ll reconstruct a few events from Tata Institute of Social Sciences (TISS), Mumbai.

Onam@TISS is a secret Facebook group. It conspires for a grand celebration of Onam at TISS. Why did it become a secret group? There was an organized, articulate Dalit (mostly non-Keralites, you won’t find many Kerala Dalits in the TISS Campus) opposition to Onam. The opposition emerged from an inter-textual reading of anti-caste scholars from Kerala and elsewhere. The administration took note of this opposition and distanced itself from Onam celebration. Thus the group is secret! 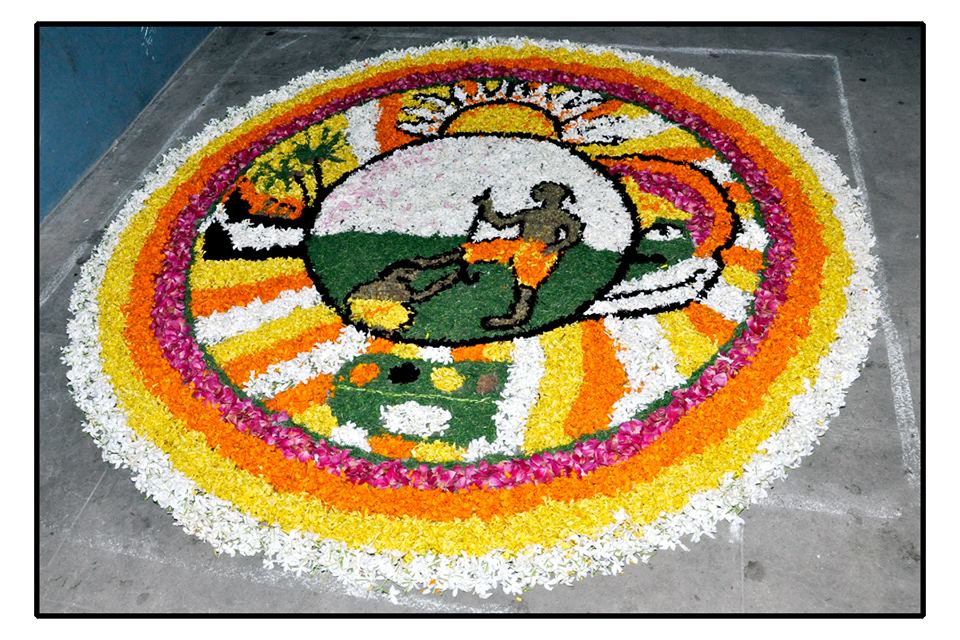 However, the opposition came after the celebration last year. I was a part of the celebration. In fact I even anchored the show. I glorified the secular credentials of the festival, only to later realize that it was, after all, a well-fed big lie. Going back to last year’s celebration, I would like to point out the ideological influence of Savarna Malayalee nationalism which implicates even the non-Malayalee.

The quadrangle was booked for the celebration. Anyone who is familiar with the quadrangle at TISS would agree that it looks exactly like a Nair nallukettu (architectural design of traditional Nair home). The nallukettu has been immortalized in Malayalam cinema and television. It fits the Onam fantasy perfectly. Rather it is the Onam Fantasy. It was further adorned with other spectacles. The huge floral design, women dressed in, what popularly is called the ‘Kerala saree’, the fragrance of perfumes and mogra, men in silk and double mundu – so on and so forth.

This sight gets even more interesting when we dwell deeper into the popular perceptions of the unified Malayalee community at TISS. When we enter the institute, in the first semester we are fed with the Kerala Development Model. It is innocently postured as ‘Kerala’s Development Experience’. A CPI (M) card holding member who also happens to be a professor at TISS would glorify the experience to the extent that he would compare Kerala with China and India. This is an instant kick for all the Malayalees. This kick becomes a perennial high when you find your Bihari classmate coming to you and touching you with great awe and affection to say, ‘Kerala is magical yaar!’ 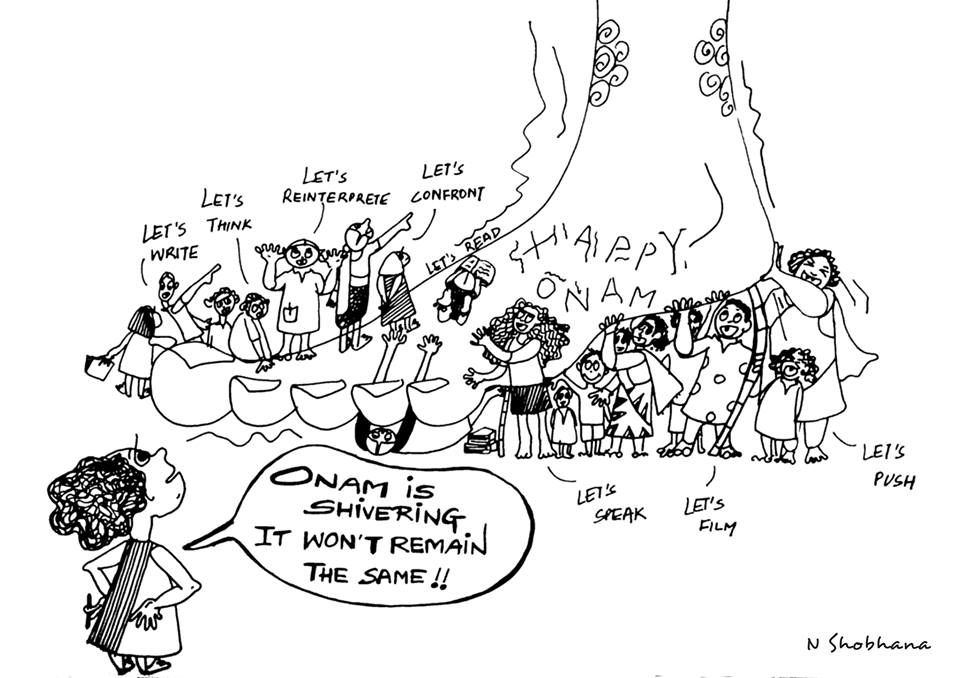 Then later in the semester, when Onam arrives, you have students from all over the country defending its celebration. Where does this defence emerge from? Very clearly it emerges from a comparative but flawed reading of Kerala as a secular geography. So, the myth of ‘secular Kerala’ feeds the myth of ‘secular Onam’!

These emotions got even more virulent recently during one of the General Body Meetings. Though I wasn’t present in the meeting, I was told that the emotions scaled new heights when the Hindutva right wing students on campus joined hands with Malayalees to put up a grand celebration! Appropriations were happening at multiple levels. The dominant Malayalees (of course you know their castes) were being extremely generous when they tried to accommodate ‘Dalit voices’ in the celebration. How do they plan to do this? They plan to accommodate, by asking, a Dalit girl from Kerala (she is the sole Dalit woman from Kerala in the TISS Campus) to sing a Dalit folk song.

I do not know whether we would witness an Onam celebration this year. However, it’s true that celebrations are important. Accommodative politics wouldn’t change the protocol. We need alternatives which are clearly, anti-caste and anti-sexist. They should also challenge puritan notions of heterosexuality.

[1]. I thank my friend Ferzine Imitiaz for the phrase.

[2]. Not all Christians were subjected to these jokes. The fair-skinned so called ‘Brahmin-converts’ among the Syrian Christian community were exempted.

[3]. However, this humour killing is graded.

Nidhin Shobhana is a graduate in Sociology from Pune University. 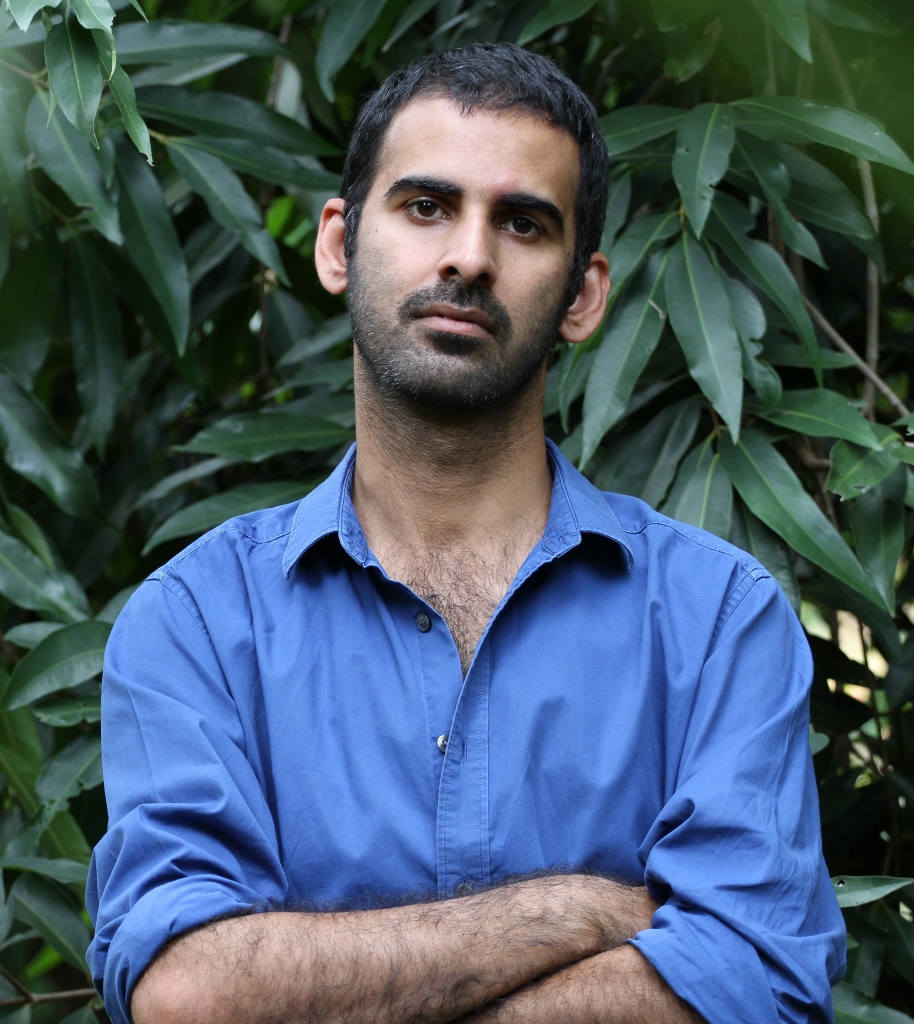 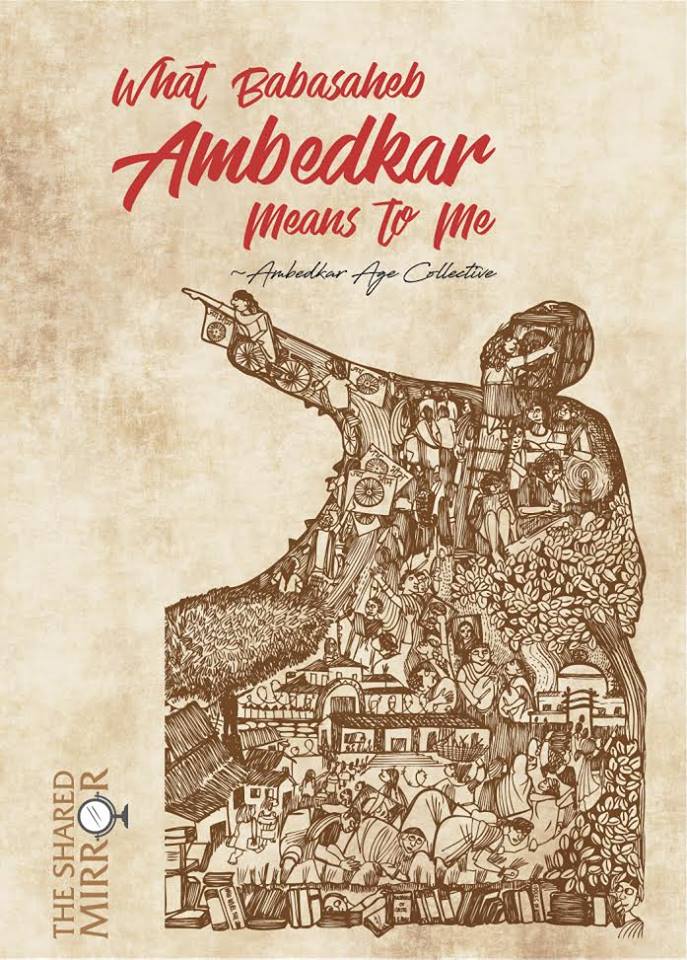 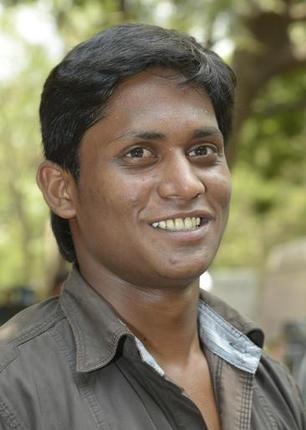