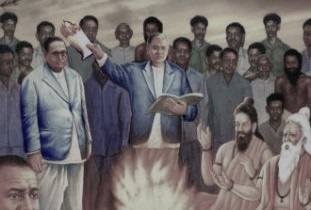 Today is Christmas, 25th of December. It is celebrated all over the Christian world as the birth of Jesus Christ. But for the whole world of Dalits, it is an important day as “Manu Smruti Dahan Din”, as it was on this day in 1927 that Manusmruti was publicly burned by Dr. Ambedkar, during the “Maha-Sangharsha” of Mahad Satyagraha, and is an important mile stone in Dalit struggle against Brahmanism. Let us all remember this day with pride.

Manuvadis had arranged that Ambedkar does not get a ground for meeting, but a Muslim gentleman, Mr. Fattekhan, gave his private land. They had arranged that no supplies of food, water or anything else could be bought, so everything was brought from outside by our men. The volunteers had to take a vow of five items:

1. I do not believe on Chaturvarna based on birth.

2. I do not believe in caste distinctions.

3. I believe that untouchability is an anathema on Hinduism and I will honestly try my best to completely destroy it.

4. Considering that there is no inequality, I will not follow any restrictions about food and drink among at least all Hindus.

5. I believe that untouchables must have equal rights in temples, water sources, schools and other amenities.

Dr. Ambedkar came from Bombay by boat “Padmavati” via Dasgaon port, instead of Dharamtar, though it is longer distance, because in the event of boycott by bus owners, they could walk down five miles to Mahad.

Some people later tried to say that Dr. Ambedkar decided to burn Manusmruti at the eleventh hour, as he had to withdraw the programme of drinking water from Chavadar Tank under court orders and persuasion by the Collector. That is not true, because right in front of the pendal of the meeting a “vedi” was created beforehand to burn Manusmruti. Six people were labouring for two days to prepare it. A pit six inches deep and one and half foot square was dug in, and filled with sandal wood pieces. On its four corners, poles were erected, bearing banners on three sides. Banners said:

On 25th December, 1927, at 9 p.m., the book of Manusmruti was kept on this and burned at the hands of Bapusahib Sahastrabuddhe and another five to six dalit sadhus.

In the pendal, there as only one photo, and that was of M. Gandhi, so it seems, dalit leaders including Dr. Ambedkar had yet to be disillusioned by Gandhi. At the meeting there was Babasaheb’s historical speech. The main points of speech were:

We have to understand why we are prevented from drinking water from this tank. He explained Chaturvarna, and declared that our struggle is to destroy the fetters of Chaturvarna, this was the starting point of the struggle for equality. He compared that meeting with the meeting of 24th Jan. 1789, when Louis XVI of France had called a meeting of French peoples representatives. This meeting killed the king and queen, harassed and massacred the upper classes, remaining were banished, property of the rich was confiscated, and it started a fifteen year long civil war. People have not grasped the importance of this Revolution. This Revolution was the beginning of the prosperity of not only France but the whole of Europe and has revolutionized the whole World. He explained French Revolution in detail. He then explained that our aim is not only to remove untouchability but to destroy chaturvarna, as the root cause lies there. He explained how Patricians deceived Plebeians in the name of religion. The root of untouchability lies in prohibition of inter-caste marriages, that we have to break, he thundered. He appealed to higher varnas to let this “Social Revolution” take place peacefully, discard the sastras, and accept the principle of justice, and he assured them peace from our side. Four resolutions were passed and a Declaration of Equality was pronounced. After this Manusmruti was burned as mentioned above.

There was a strong reaction in the Brahmanical press, Babasaheb was called “Bheemaasura” by one paper. Dr. Ambedkar justified the burning of Manusmruti in various articles. He ridiculed those people that they have not read the Manusmruti, and declared that we will never accept it. For those who say it is an outdated booklet so why give importance to it, he invited attention to atrocities on dalits and said, these are because Hindus are following this book. And further asked, if it is outdated, how does it matter to you if somebody burns it. For those who enquire, what is achieved by dalits by burning it, he retorted, what M. Gandhi achieved by burning foreign clothes, what was achieved by burning “Dnyana-prakash” which published about the marriage of Khan-Malini, what was achieved by those who burned Miss Mayo’s book “Mother India” in New York, what was achieved by boycotting Simon Commission formed to frame political reforms? These were the forms of registering the protests, so was ours against Manusmruti.

He further declared, that if unfortunately, this burning of Manusmruti does not result in destruction of “Brahmanya”, we will have to either burn the “brahmanya-grast” people (i.e. affected by brahmanism), or renounce Hinduism.

Let all of us pay tribute to this great day. 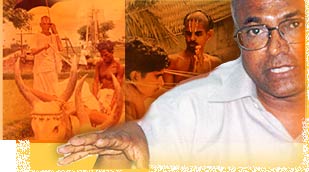