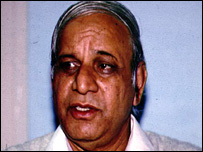 Kanshi Ram will be remembered as someone who almost completely changed the rules of Indian politics over the last two decades. Few political analysts would disagree that his unique brand of social engineering and organisational skills succeeded in uniting India’s low caste Dalit community into a formidable political force in several states.

In the process he built a new constituency for himself and his Bahujan Samaj Party (BSP).

Even his political enemies – including those who suffered from the emergence of the BSP – acknowledge that politics in substantial parts of northern India can never been the same again.

That is especially the case in the politically crucial state of Uttar Pradesh (UP).Dalits united under Mr Ram’s leadershipThe misfortunes of India’s governing Congress party in UP can largely be traced back to the Kanshi Ram phenomenon.

Until the mid-1980s, low caste Dalits formed the mainstay of the Congress party’s electoral base in UP, which sends the largest number of MPs to the national parliament.

This solid support allowed the party to rule India almost uninterrupted until 1989, when the BSP of Kanshi Ram prompted many Dalits to desert the Congress party.

Of course there are other reasons for the Congress party’s debacle in UP, but the loss of Dalit support has been a crucial factor.

The party was not just relegated to the fourth place in UP, but its strength in the national parliament was also eroded .

Born in Punjab in 1934, Kanshi Ram was the eldest of eight siblings. 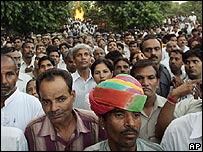 His upbringing was modest: he studied up to graduation, and there was nothing in his early years to suggest that there was a silent political and social revolutionary lurking within.

It was only after he took up a government job in the western Indian state of Maharashtra that he began to be influenced by the writings and political philosophy of BR Ambedkar, a social reformer and architect of free India’s constitution.

Mr Ambedkar voiced the concerns of India’s low caste community – particularly Dalits – in the run up to the country’s independence.

In the mid-1960s, Kanshi Ram began to organise Dalit government employees to fight against what he saw as the deeply entrenched prejudice of higher caste people.

It was around this time that he decided that he would not marry but dedicate his life to the cause of Dalit improvement.

By the mid-1980s, he decided to take the plunge into active politics.

The result was the formation of the BSP (the Common Man’s Party) in 1984.

As a politician, he soon began to attract national attention even though he was not renowned for his oratorical skills or for his personal charisma.

He excelled however as a master strategist and organiser, and used these strengths to carve out a niche for Dalits.

This was done using an often combative and aggressive strategy, with virulent attacks on other political parties which he claimed only represented the interests of higher caste Hindus.

The BSP coined slogans such as “tilak, taraju aur talwar, maaro unko joote char”, which meant that that the three upper castes of Hindu society (Brahmins, warriors and traders) should all be beaten four times with a shoe.

While Kanshi Ram became a hate figure in the eyes of many upper caste Hindus, his style succeeded in unifying the Dalits under the BSP banner in several states.

The experiment worked particularly well in UP, where the party managed to have its own chief minister on three occasions.

Elections are due again in the state next year and many analysts see the BSP as the principal challenger to the regional party which is currently ruling the state.

While Kanshi Ram may have helped Dalits to win political and democratic recognition, he often ran his party like a dictator.

His decisions were sometimes arbitrary and he seldom tolerated dissent. His critics also accuse him of making Indian politics even more mired in caste equations than it was before his arrival on the political scene.

But there is little doubt that he changed the character of Indian politics, and his place in history is unlikely to be forgotten.