Born in a Hindu family, I grew up listening to the phrase ‘Matha Pitha Guru Deivam’ which emphasizes that mother comes first in the universe and everyone else comes next, even God. I often see various posts on social media that praise the teachings of Hindu society saying, we love and respect our mother every day and we don’t need to celebrate Mother’s Day once a year like the western nations do. These statements depict a rosy picture. Are these statements true? Do we respect our mother equally in every aspect and at every instance? Let us analyze some instances from our daily lives. There is a belief in Hindu society that you ask your mother to come in your way whenever you go out, in the belief that the work gets done successfully. Now consider your mother is a widow and when she comes in your way, you refuse her because she was defiled due to the loss of her husband as per the Hindu tradition. These Hindu hypocrites say that your mother comes first in the universe, but the value of your mother is defiled due to the loss of her husband. This means that the value of the mother depends on her husband—that’s what the patriarchal Hindu society advocates. What is this defilement? Is it a kind of invisible and communicable virus that leads you to death?

From my understanding, Hindu marriages comprise rituals that degrade women. For instance, let us discuss how the widowed mother is considered a defiled object on the grounds of marriage. Hindu society says that your widowed mother is not eligible to perform the rituals, and hence, your aunt and uncle are encouraged to sit as your parents to complete the marriage rituals. This conveys that you ask your mother to relinquish her place at the time of your marriage just because she is a widow. Is this all the respect you give to your mother? The woman who bore all the pains and who brought you up gets only relative status in your marriage due to the superstitions and fallacies of the hypocritical Hindu marriage system. Recently, I came across Hindu scriptures that laud the greatness of women and emphasize the essence of women. However, I want to share a statement I came across while reading i.e. Aitareya Brahmana states that a widower can continue his Vedic sacrifices, even if he has no wife. Sraddha or devotion shall function as his wife. In Ramayana, it is said that Rama performed his sacrifices with an image of his wife by his side. Later on, Manu and many others advocated for widowers to marry again. This shows that a widower is allowed to perform the Vedic sacrifices in Hindu society despite his wife being dead. However, the same Hindu society refuses to allow the widow to perform the Vedic sacrifices when her husband is dead. The defilement occurs only to the widow but not to the widower as per the Hindu scriptures.

Let us come back to the marriage system of Hindu society where Brahma marriage is most prevalent in India. In this system, you can distinguish between women who are married and those who are unmarried. However, you cannot distinguish between men who are married and those who are unmarried. The reason is that married women have to mandatorily wear so-called ‘thali’ (‘mangalsutra’) around their neck, rings on their toes, and unique types of bangles on their hands. However, a married man is identical to an unmarried man because he never wears anything to distinguish himself from an unmarried man. These so-called ornaments are attached to women to display men’s supremacy over women. I do not wish to compare women to domestic animals but these conventional mechanisms make me do it. You tie a belt around the neck of a domestic animal whereas you tie so-called ‘thali’ to your wife; you tie shackles to the legs of a domestic animal whereas you put rings on the toes of your wife. You want the domestic animal to pursue your needs, similarly you want a wife to pursue your needs like cooking, cleaning, and progeny. You give orders to the domestic animal and urge them to obey whereas you give orders to your wife. This Brahma form of marriage is so popular and used widely among the Hindus where the hegemony of men presides and women are treated as second-class citizens.

However, there is Gandharva form of marriage which is one of the eight forms of marriage based on mutual consent and no rites or ceremonies solemnize the marriage of free love. But why has this form of marriage become extinct? Is it because the consent of women is respected in Gandharva form whereas Brahma form denies it? Is it to continue the male domination by encouraging the Brahma form? Is this not the hypocrisy of  the Hindu society where the talk about women is so loud and in practice, it is completely zero? Not only married women but even a girl child is asked to wear bangles, anklets, earrings, and nose rings whereas boys are never asked to wear these. I don’t know what the reasons for these kinds of practices are in Hindu society. As far as I understand this is only to show the hegemony of men over women.

A Rajeshbabu did his bachelor’s degree from University of Delhi in B.A (Hons) Economics. He was admitted last year to Azim Premji University for Masters in Development Program, but due to family issues he had taken one year deferment from the university. Now he is planning to rejoin the masters program in Azim Premji University in the upcoming academic year. 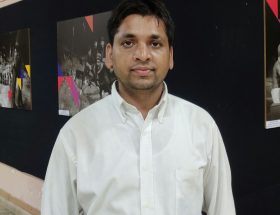