Caste and Caste-Based Discrimination among Indian Muslims – Part 2: Indian Muslim Society in the Shadow of Casteism

(Translated from Urdu by Yoginder Sikand, for NewAgeIslam.com)

[Translator’s Note: This is a translation of Dr. Faridi’s Introduction to Masood Alam Falahi’s Urdu book Hindustan Mai Zat-Pat Aur Musalman (‘Casteism Among Muslims in India’) [Ideal Foundation, Mumbai, 2009, pp. 32-35. For the sake of brevity, I have deleted some lines that I did not find directly relevant. I have sought to present the spirit of the text and, hence, have not made a literal translation throughout – Yoginder Sikand, NewAgeIslan.com]

Indian Muslim Society in the Shadow of Casteism

[Translated from Urdu by Yoginder Sikand, for NewAgeIslam.com]

When I received the first instalment of a series of articles by my dear brother Masood Alam Falahi for publication in Zindagi-e Nau I had no idea that these articles would, in the future, take the form of a voluminous book. As successive instalments began being published in the journal, it dawned on me that this series represented an in-depth analysis of a painful and dark side of the history of the Muslims of India.

The basis of Islam is tauhid, the oneness of God, the very opposite of shirk or polytheism. Tauhid clearly suggests a direct relationship between human beings and God, with no role whatsoever for intermediaries. Tauhid liberates human beings from man-made religious beliefs and complicated, twisted philosophies. All along, efforts have been made, consciously and otherwise, by purohits, pundits, maulvis and so on, to erect high walls between human beings and their Creator and to dilute tauhid. However, with the grace of God, these efforts have all miserably failed.

Lamentably, however, another basic principle of Islam, which follows from the belief in tauhid—the fundamental oneness of all human beings—did not escape being cruelly trampled upon. And in this regard enemies played less of a role than the flag-bearers of Islam themselves. In India, the indigenous philosophical and religious systems that were based on caste and caste discrimination played havoc with the Islamic insistence on social equality. This assault took various forms, such as exaggerated respect for the Syeds (takrim-e sadat), which led to Muslim society being divided in the name of Islam itself between the self-styled ashraf and the so-called arzal. It appeared in the shape of distorted rules of kufu’ governing marriage that converted the Prophet’s purely practical instructions on the matter into what later came to be viewed as religious commandments. While at a certain stage of Muslim history it was considered, purely from a pragmatic point of view, that only members of the Quraish tribe could become Caliph, it came to be understood as a permanent Islamic injunction. And so on. The implications of these wrongful interpretations were so deep-rooted and widespread that the Muslim community in India soon came to be completely suffocated by the curse of caste. And that is how Muslim Sultans, ulema and ‘ordinary’ folk all audaciously agreed to sabotage and grossly violate this eternal instruction of the Quran:

Everyone—Syeds, Shaikhs, Mughals, Pathans and Shudras—was complicit in completely distorting the image of the Muslim millat and in promoting division and strife within it. God has blessed our respected brother Masood Alam Falahi with an extraordinary capacity to research and analyse so as to lift the curtain that veils this terrible reality and to encourage Muslim society to consider urgently-needed reforms in this regard. We have all been silently witnessing these glaring and dangerous divisions of caste in our society but we lacked the courage to talk about this subject and even to indicate how completely opposed to Islam all of this is.

One tragic consequence of efforts to seek to wrongly legitimise the philosophy of caste division in Islam has been that when vast numbers of people who were oppressed by the Indian caste system embraced Islam, attracted by its teachings of equality and human unity, they had to face the same sort of filth and oppression here, too. After converting to Islam, they found that they still remained Bhangis, Chamars, Kunjaras, Qasais and Julahas, and were incorporated as the most ‘despicable’ classes of Muslim society. On conversion, their names changed but not the way in which they were treated by others. The Muslims were now solidly divided into ‘noble’ (sharif) and ‘despicable’ (razil). So sternly was this division maintained that it was given legitimacy even in Islamic schools. Fatwas about marriage and divorce came to be based on the caste of people and the related rules of kufu’ that were concocted. Brother Masood has provided us plenty of evidence that very well illustrates all of this. Many people may be angry with what he has written. They might castigate his writings as untimely and inappropriate. Some of them might even claim that caste-based division and discrimination are now vanishing among Muslims and that, therefore, there is thus no need to scratch old wounds.

I have no hesitation in saying that the power of caste is indeed declining today, particularly in the matter of selection of spouses. However, the real reason for this are modern communications and travel, which have been made possible by new technologies and material resources. Because of this, today’s youth are being freed from the hold of their homes and societies. They can now increasingly find spouses of their choice themselves. Higher education, especially of a professional sort, have reduced the salience and appeal of caste. All this may have much to commend it, but a painful aspect of this changing reality is that this decline of caste consciousness that should have come about through religious reform and inspiration is, instead, being caused by economic transformations. Transformations wrought by economic motives are, generally speaking, imbalanced, and there is no need to assume it will not be so in this case as well. Another tragic aspect of this is that these efforts to end caste-based division and discrimination in Muslim society are not a result of religious commitment and activism, but, on the contrary, of increasing irreligiousness and materialism that pose a grave threat to the very identity and character of the Muslim millat. At the same time, we must not forget that caste divisions still remain very strong among the vast majority of the Indian Muslims, and to ignore its consequences is nothing but foolishness.

The adoption of, or adaptation to, the inhuman and horrendously divisive caste system by the Muslims also continues to pose major hurdles in the path of dawah or inviting others to Islam. With what face can Muslims invite Dalits and other oppressed classes to Islam if the latter feel that Islam’s commitment to equality and justice is only theoretical, and when they see that, in some cases, arzal or so-called ‘low’ caste Muslims are forbidden from worshipping in mosques by their so-called ashraf or ‘high’ caste co-religionists, and when they see that Muslim society is such that if they convert to Islam they will have to face the same sort of demeaning insults as they have had to for centuries? This is why it is an urgent missionary duty to promote, not just through words but, more importantly, through practical social efforts, respect for all human beings based on God consciousness. At this point I want to add that for centuries the ulema and other guides of the Muslim millat have focussed almost all their efforts on the protection of the faith, giving very little attention at all to the fundamental duty of dawah.

The unity of the whole of humankind is the message of Islam. It is a gift presented to suffering humanity. Islam must be seen in this perspective. Social reform is not always an easy process. There is always the danger that it will not be liked or tolerated by some elements, who are bound to oppose criticism. All the same, this effort by Masood Alam Falahi deserves to be welcomed as constructive and as geared to promoting social reform and the cause of dawah. The bitter truths that he recounts must be patiently listened to. This book backs its claims with copious footnotes, references and reliable quotations. Hence, it would be wrong to say that the author is motivated by a desire for character assassination. He mentions harsh realities in order to express the tremendous pain that stirs his heart. I have examined and judged his text from the perspective of the dawah imperative, which should be of primary concern for us as Muslims. Those committed to dawah must be always ready to bandage wounds and to critique themselves and others where necessary, irrespective of the consequences, even if this means having to face insults and a torrent of fatwas. In this regard, I find this effort by Masood Alam Falahi inspiring and encouraging.

Where Masood Alam Falahi has indicated the weaknesses of present-day Muslim society, he has not forgotten to highlight the true teachings of Islam. Hence, the book is by no means a collection of accusations and criticisms, but, rather, a work that is presented in a very proper perspective.

[The author Dr. Fazlur Rahman Faridi is Editor, monthly Zindagi-e Nau, member of the Consultative Commitee of the Jamaat-e Islami Hind, and founder-member of the All-India Muslim Personal Law Board] 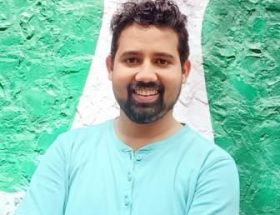