Both the money-eating government employees who harass the farmers and the completely illiterate farmers who give them bribes out of their dependence get legal punishment. If the cost of the police investigation is born by the bhakri-eating fearful weaponless ruined farmers along with the Bhat Phadke who organized attacks against the unarmed police; and if the thieves of all castes who steal from the farmers’ houses are given the same legal punishment; then by the same standard those farmers whose houses are robbed while they are in the throes of their deep sleep should also be given a legal punishment?! If our Legislative Council would make such a law and free the necks of our spineless police, there will be bells ringing in that Simla so near to heaven.

Many ritualistic Brahman employees get the ignorant rich farmers to give gifts to so many of the bards and story-tellers of their caste. Many politicking cunning fellows meet the ignorant rich farmers and convince them to build new temples of Radha and Krishna from village to village, or get old temples renovated and on the occasion of their inauguration arrange so many huge Brahman feasts. Many cunning employees, behind the backs of the European employees, give all kinds of trouble to the ignorant farmers and even if the farmers curse them, they (the employees) make such a show of officious frivolity before the European employees day and night that they get promotions. How the European employees, with their peculiar “tumi-ami” talk, who have to make such efforts to give a pure Marathi speech for even ten minutes, understand the Chatrapati Maharaj of Satara or the Himmatbahadur Military Chief Nimbalkar, or Ghatge, Mohite or Dabhade, Ghorpade and all the nobles of heroic peasant birth and clear away their difficulties, God knows! So many cunning Brahman employees act according to this policy all the time and deliberately put forward so many defaming vile Bhat-Brahmans in all districts, and bring into being huge Samajes at their hands, using their influence and contacts with the Shudra farmers, grass-cutters, woodcutters, contractors, pensioners and estate-holding gentlemen to make them members of any Samaj they want. The Brahman officials have become so useful for many European employees in helping out in their delicate domestic work that the European employees give recommendations about them to the government and procure them honours as Raosaheb, and when these European employees are transferred to another district, then this flattering servile Raosaheb makes whatever award he can invent and taking some scrawled signatures from some falsely respected parading ignorant rich Kunbis and Malis or Telis and Tambolis of the cities, holds a huge meeting in the massive court of some illiterate Shudra contractor, and makes him a presentation of this award.

In sum, damage resulting from natural and political droughts to Shudra and Ati-Shudras, or due to the assaults of pests can be repaired anytime; but the Bhats who dominate in all the government departments because nearly all the European employees are besotted by idleness and luxury do do much damage to the ignorant farmers here, like the Brahman landlords of the Konkan, that there is no hope of it ever being repaired. If all the big and little stories about this were written, it would be like the book, “Mysteries of the Court of London.” When the Christian people could not bear to see this miserable situation of the ignorant farmers, they began to make an outcry on the name of the education department of “United Great Britain.” Here, when many big sardars along with well-bred gentlemen began to uncover the absolute degradation of some of the main officials of the Education Department, the compassionate Governor Generalsaheb only established a committee of four or five great learned gentlemen to make a thorough enquiry. Mr. Huntersaheb was the Chairman of that, and taking his compatriots, like Nimrod the Hunter, he made a big tour of all three presidencies in a big railway carriage. However, without making a detailed examination of all the calamities the Shudra and Ati-Shudra farmers have to bear because they are illiterate, without going himself into the filthy huts of the farmers and, holding a handkerchief before his nose, viewing their true misfortune with their own eyes and taking the testimony of the true, lungoti-wearing illiterate farmers, he showed instead great concern to get the testimony of the caste Brahmans among the Parsis, Christians and Hindus, and won some great testimonials. Finally, he got his own boots polished, it is true, but we cannot infer that the illiterate farmers could have gotten any appropriate benefit from his report. In conclusion, we hope that Mr. Huntersaheb will not bring the majestic Governor Generalsaheb into collision with cunning people like Mr. Thuckersaheb (of the Salvation Army) so that he should give his resignation and with strenuous efforts go himself to the alleys and lanes of the impoverished ignorant farmers to sit in their creaky bullock carts and liberate them from ignorance and darkness. Out of this, the kettledrums of his own (Hunter Saheb’s) fame will be beaten; and his voice will reach the ears of the representatives of the republican regime on the other side of the earth to open their eyes and fill their hearts with compassion about the black “Red Indians.”

In this chapter, if anyone wants proof of what has been written about the behavior of the government Brahman employees, it can easily be found in various places among those who have been punished for the crimes of bribery or false testimony. 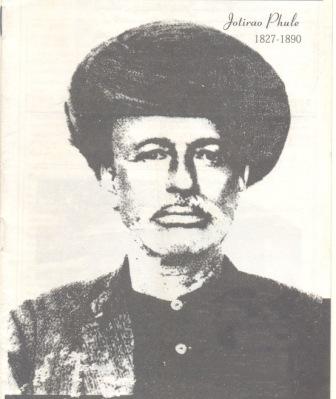